Starbucks Co. (NASDAQ:SBUX) Given Average Recommendation of “Hold” by Brokerages

Shares of Starbucks Co. (NASDAQ:SBUX – Get Rating) have been assigned an average rating of “Hold” from the twenty-eight ratings firms that are currently covering the company, Marketbeat reports. Nine research analysts have rated the stock with a hold rating and seven have assigned a buy rating to the company. The average 12-month price target among brokerages that have issued a report on the stock in the last year is $101.58.

Starbucks (NASDAQ:SBUX – Get Rating) last posted its quarterly earnings results on Tuesday, May 3rd. The coffee company reported $0.59 EPS for the quarter, missing analysts’ consensus estimates of $0.60 by ($0.01). Starbucks had a net margin of 14.07% and a negative return on equity of 53.43%. The firm had revenue of $7.64 billion for the quarter, compared to analysts’ expectations of $7.60 billion. During the same quarter in the previous year, the company earned $0.62 EPS. The company’s quarterly revenue was up 14.5% compared to the same quarter last year. On average, sell-side analysts forecast that Starbucks will post 2.89 EPS for the current year.

About Starbucks (Get Rating)

Starbucks Corporation, together with its subsidiaries, operates as a roaster, marketer, and retailer of specialty coffee worldwide. The company operates through three segments: North America, International, and Channel Development. Its stores offer coffee and tea beverages, roasted whole beans and ground coffees, single serve products, and ready-to-drink beverages; and various food products, such as pastries, breakfast sandwiches, and lunch items. 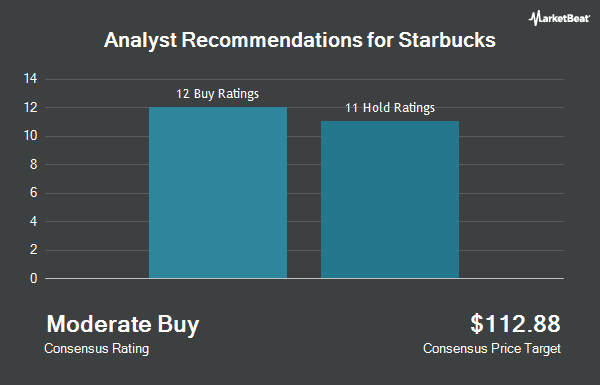 DoorDash and The Competition Financial Comparison

Complete the form below to receive the latest headlines and analysts' recommendations for Starbucks with our free daily email newsletter: