A number of other research analysts have also weighed in on RUN. Morgan Stanley cut their price target on shares of Sunrun from $89.00 to $70.00 and set an “overweight” rating on the stock in a research note on Monday, June 13th. Piper Sandler cut their price objective on shares of Sunrun from $41.00 to $39.00 in a research report on Thursday, April 21st. Thirteen research analysts have rated the stock with a buy rating, According to MarketBeat.com, Sunrun currently has a consensus rating of “Buy” and a consensus price target of $55.08.

Sunrun (NASDAQ:RUN – Get Rating) last released its quarterly earnings data on Wednesday, May 4th. The energy company reported ($0.42) earnings per share for the quarter, missing the consensus estimate of ($0.07) by ($0.35). Sunrun had a negative return on equity of 1.64% and a negative net margin of 8.10%. The firm had revenue of $495.78 million for the quarter, compared to the consensus estimate of $401.60 million. During the same period in the previous year, the business earned ($0.11) EPS. The firm’s revenue was up 48.1% compared to the same quarter last year. As a group, equities research analysts anticipate that Sunrun will post -1.11 EPS for the current fiscal year. 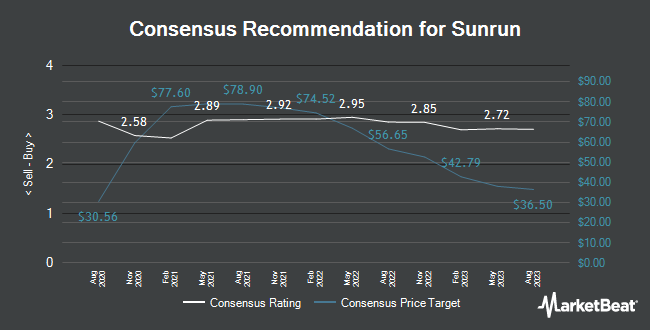