Diversified Trust Co decreased its stake in shares of United Microelectronics Co. (NYSE:UMC – Get Rating) by 74.9% during the 1st quarter, according to the company in its most recent filing with the SEC. The firm owned 54,964 shares of the semiconductor company’s stock after selling 164,417 shares during the quarter. Diversified Trust Co’s holdings in United Microelectronics were worth $501,000 as of its most recent filing with the SEC.

Separately, StockNews.com upgraded shares of United Microelectronics from a “buy” rating to a “strong-buy” rating in a research note on Thursday, May 5th. Two investment analysts have rated the stock with a hold rating, three have given a buy rating and two have assigned a strong buy rating to the company. Based on data from MarketBeat.com, the stock has a consensus rating of “Buy”.

The business also recently declared an annual dividend, which will be paid on Thursday, July 21st. Stockholders of record on Wednesday, June 22nd will be paid a $0.2866 dividend. The ex-dividend date is Tuesday, June 21st. This represents a dividend yield of 7.1%. This is an increase from United Microelectronics’s previous annual dividend of $0.29. United Microelectronics’s dividend payout ratio is 22.92%.

Want to see what other hedge funds are holding UMC? Visit HoldingsChannel.com to get the latest 13F filings and insider trades for United Microelectronics Co. (NYSE:UMC – Get Rating). 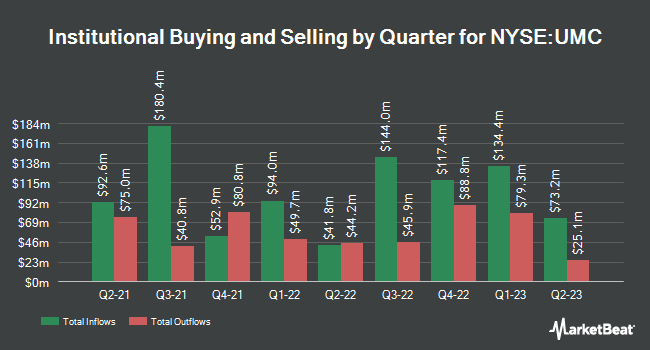 Complete the form below to receive the latest headlines and analysts' recommendations for United Microelectronics with our free daily email newsletter: