Pacer Advisors Inc. raised its stake in Eni S.p.A. (NYSE:E – Get Rating) by 66.4% during the first quarter, according to its most recent disclosure with the Securities and Exchange Commission (SEC). The firm owned 150,162 shares of the oil and gas exploration company’s stock after acquiring an additional 59,928 shares during the period. Pacer Advisors Inc.’s holdings in ENI were worth $4,392,000 as of its most recent SEC filing.

ENI (NYSE:E – Get Rating) last released its quarterly earnings results on Friday, April 29th. The oil and gas exploration company reported $2.04 EPS for the quarter, topping analysts’ consensus estimates of $1.56 by $0.48. The company had revenue of $33.79 billion for the quarter. ENI had a return on equity of 17.57% and a net margin of 9.44%. Equities analysts anticipate that Eni S.p.A. will post 6.72 EPS for the current year.

About ENI (Get Rating)

Eni S.p.A. engages in the exploration, development, and production of crude oil and natural gas. It operates through Exploration & Production; Global Gas & LNG Portfolio; Refining & Marketing and Chemicals; Plenitude and Power; and Corporate and Other activities segments. The Exploration & Production segment is involved in the research, development, and production of oil, condensates and natural gas; and forestry conservation and CO2 capture and storage projects. 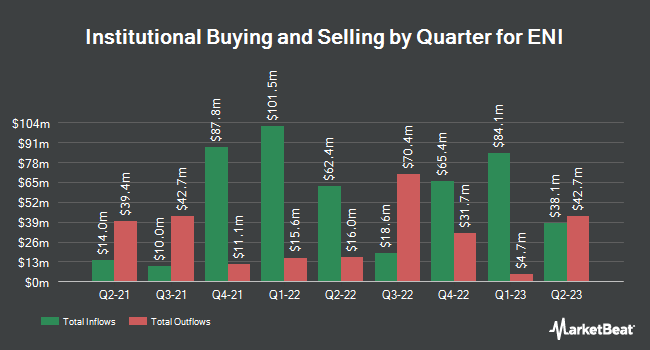 Receive News & Ratings for ENI Daily - Enter your email address below to receive a concise daily summary of the latest news and analysts' ratings for ENI and related companies with MarketBeat.com's FREE daily email newsletter.

Complete the form below to receive the latest headlines and analysts' recommendations for ENI with our free daily email newsletter: