StockNews.com upgraded shares of Boyd Gaming (NYSE:BYD – Get Rating) from a buy rating to a strong-buy rating in a research note issued to investors on Thursday.

Boyd Gaming (NYSE:BYD – Get Rating) last released its quarterly earnings data on Tuesday, April 26th. The company reported $1.40 earnings per share for the quarter, beating analysts’ consensus estimates of $1.24 by $0.16. The firm had revenue of $860.74 million during the quarter, compared to analyst estimates of $836.15 million. Boyd Gaming had a return on equity of 42.72% and a net margin of 15.09%. During the same quarter in the prior year, the firm posted $0.93 earnings per share. Research analysts predict that Boyd Gaming will post 5.47 EPS for the current year.

The company also recently announced a quarterly dividend, which will be paid on Friday, July 15th. Shareholders of record on Thursday, June 30th will be given a $0.15 dividend. The ex-dividend date of this dividend is Wednesday, June 29th. This represents a $0.60 annualized dividend and a yield of 1.22%. Boyd Gaming’s payout ratio is 6.28%.

About Boyd Gaming (Get Rating) 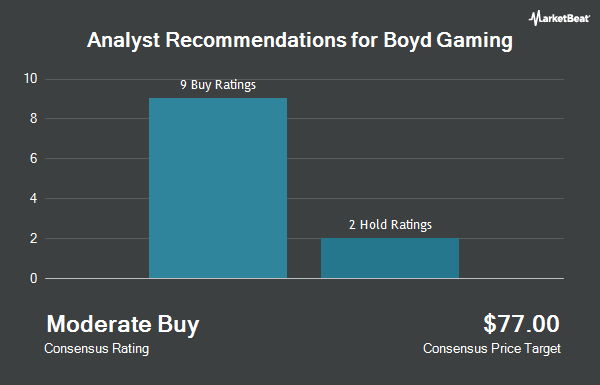