Shares of Playtika Holding Corp. (NASDAQ:PLTK – Get Rating) have been assigned an average rating of “Moderate Buy” from the eleven analysts that are covering the stock, MarketBeat reports. Two equities research analysts have rated the stock with a hold rating and five have assigned a buy rating to the company. The average 1-year target price among analysts that have covered the stock in the last year is $24.45.

Playtika (NASDAQ:PLTK – Get Rating) last announced its earnings results on Tuesday, May 10th. The company reported $0.20 earnings per share for the quarter, missing analysts’ consensus estimates of $0.22 by ($0.02). Playtika had a negative return on equity of 82.08% and a net margin of 13.58%. The firm had revenue of $679.60 million for the quarter, compared to the consensus estimate of $641.85 million. During the same quarter last year, the business posted $0.17 EPS. Playtika’s revenue for the quarter was up 6.4% on a year-over-year basis. On average, research analysts predict that Playtika will post 0.76 earnings per share for the current fiscal year.

About Playtika (Get Rating)

Playtika Holding Corp. develops mobile games in the United States, Europe, the Middle East, Africa, the Asia Pacific, and internationally. The company owns a portfolio of casual and casino-themed games. It distributes its games to the end customer through various web and mobile platforms, such as Apple, Facebook, Google, and other web and mobile platforms and its own proprietary platforms. 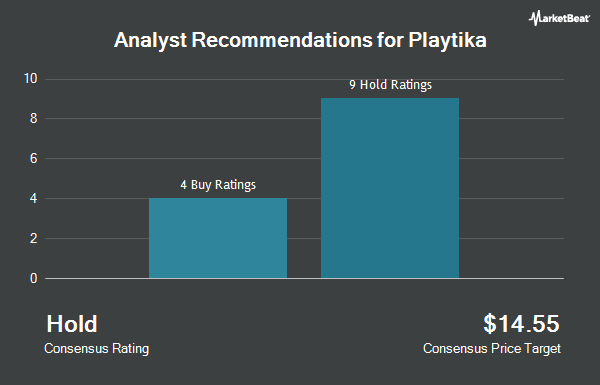 Receive News & Ratings for Playtika Daily - Enter your email address below to receive a concise daily summary of the latest news and analysts' ratings for Playtika and related companies with MarketBeat.com's FREE daily email newsletter.

Complete the form below to receive the latest headlines and analysts' recommendations for Playtika with our free daily email newsletter: