Methanex Co. (TSE:MX – Get Rating) (NASDAQ:MEOH) – Stock analysts at Raymond James raised their Q4 2022 earnings per share (EPS) estimates for Methanex in a research note issued to investors on Wednesday, June 22nd. Raymond James analyst S. Hansen now anticipates that the company will post earnings of $1.83 per share for the quarter, up from their prior estimate of $1.82. The consensus estimate for Methanex’s current full-year earnings is $5.45 per share.

Methanex (TSE:MX – Get Rating) (NASDAQ:MEOH) last issued its quarterly earnings data on Wednesday, April 27th. The company reported C$2.74 earnings per share (EPS) for the quarter, beating analysts’ consensus estimates of C$2.63 by C$0.11. The company had revenue of C$1.49 billion for the quarter, compared to analysts’ expectations of C$1.49 billion. 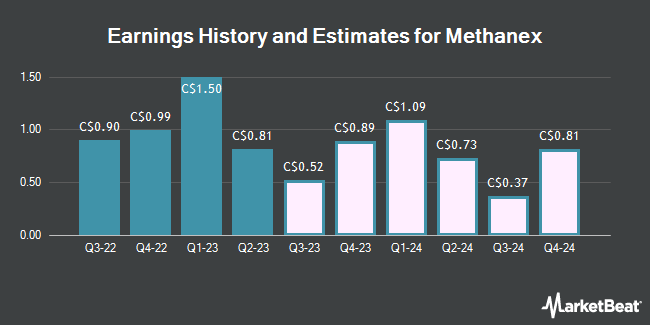