IFM Investors Pty Ltd increased its stake in shares of Elevance Health Inc. (NYSE:ELV – Get Rating) by 17.4% in the first quarter, according to its most recent 13F filing with the SEC. The firm owned 39,346 shares of the company’s stock after purchasing an additional 5,841 shares during the period. IFM Investors Pty Ltd’s holdings in Elevance Health were worth $19,328,000 at the end of the most recent reporting period.

Elevance Health (NYSE:ELV – Get Rating) last posted its quarterly earnings data on Wednesday, July 20th. The company reported $8.04 EPS for the quarter, beating analysts’ consensus estimates of $7.74 by $0.30. The company had revenue of $38.48 billion for the quarter, compared to analyst estimates of $38.05 billion. Elevance Health had a net margin of 4.09% and a return on equity of 19.20%. Elevance Health’s quarterly revenue was up 15.6% on a year-over-year basis. During the same period in the previous year, the business posted $7.03 earnings per share. Analysts expect that Elevance Health Inc. will post 28.79 earnings per share for the current year.

Anthem, Inc, through its subsidiaries, operates as a health benefits company in the United States. It operates through four segments: Commercial & Specialty Business, Government Business, IngenioRx, and Other. The company offers a spectrum of network-based managed care health benefit plans to large and small groups, individuals, Medicaid, and Medicare markets.

Want to see what other hedge funds are holding ELV? Visit HoldingsChannel.com to get the latest 13F filings and insider trades for Elevance Health Inc. (NYSE:ELV – Get Rating). 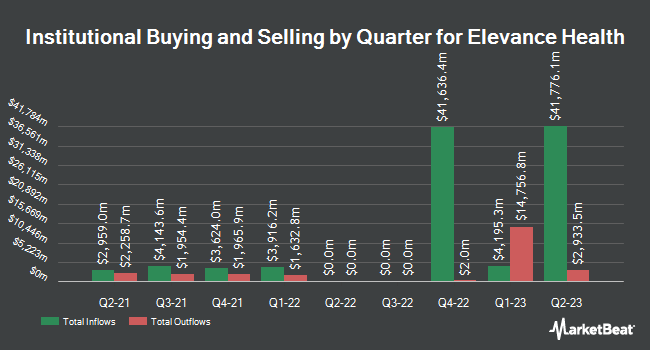 Complete the form below to receive the latest headlines and analysts' recommendations for Elevance Health with our free daily email newsletter: