State of New Jersey Common Pension Fund D lifted its holdings in shares of Revolve Group, Inc. (NYSE:RVLV – Get Rating) by 47.3% during the first quarter, Holdings Channel.com reports. The fund owned 48,091 shares of the company’s stock after acquiring an additional 15,436 shares during the period. State of New Jersey Common Pension Fund D’s holdings in Revolve Group were worth $2,582,000 as of its most recent SEC filing.

Revolve Group (NYSE:RVLV – Get Rating) last announced its earnings results on Tuesday, May 3rd. The company reported $0.30 earnings per share for the quarter, topping the consensus estimate of $0.25 by $0.05. Revolve Group had a return on equity of 33.24% and a net margin of 10.06%. The business had revenue of $283.50 million during the quarter, compared to the consensus estimate of $256.78 million. During the same period in the prior year, the company posted $0.30 EPS. The business’s quarterly revenue was up 58.5% on a year-over-year basis. On average, equities research analysts expect that Revolve Group, Inc. will post 1.24 EPS for the current fiscal year.

Revolve Group, Inc operates as an online fashion retailer for consumers in the United States and internationally. The company operates in two segments, REVOLVE and FWRD. It operates a platform that connects consumers and global fashion influencers, as well as emerging, established, and owned brands. The company offers women's apparel, footwear, accessories, and beauty styles under established and emerging brands, as well as owned brands.

Want to see what other hedge funds are holding RVLV? Visit HoldingsChannel.com to get the latest 13F filings and insider trades for Revolve Group, Inc. (NYSE:RVLV – Get Rating). 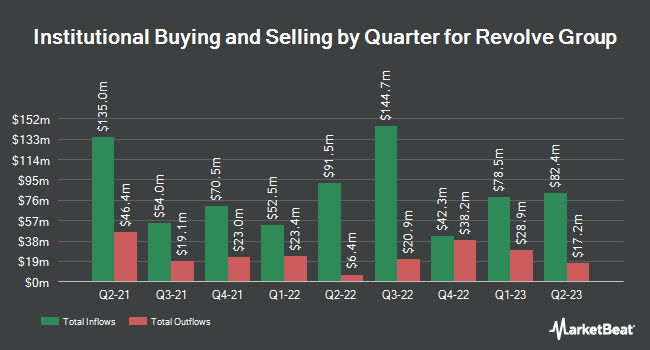 Complete the form below to receive the latest headlines and analysts' recommendations for Revolve Group with our free daily email newsletter: