Versor Investments LP bought a new position in shares of HEICO Co. (NYSE:HEI – Get Rating) during the first quarter, according to its most recent disclosure with the Securities and Exchange Commission (SEC). The firm bought 1,358 shares of the aerospace company’s stock, valued at approximately $209,000.

HEI has been the topic of several analyst reports. StockNews.com lowered shares of HEICO from a “buy” rating to a “hold” rating in a report on Wednesday, July 27th. Truist Financial cut their price target on shares of HEICO from $182.00 to $165.00 and set a “buy” rating on the stock in a report on Tuesday, July 19th. Finally, UBS Group cut their price target on shares of HEICO to $138.00 in a report on Wednesday, May 25th. Three analysts have rated the stock with a hold rating and three have assigned a buy rating to the stock. According to data from MarketBeat, the company currently has an average rating of “Moderate Buy” and an average target price of $155.33.

HEICO (NYSE:HEI – Get Rating) last announced its quarterly earnings data on Monday, May 23rd. The aerospace company reported $0.62 earnings per share for the quarter, beating analysts’ consensus estimates of $0.61 by $0.01. The firm had revenue of $538.81 million for the quarter, compared to analyst estimates of $532.19 million. HEICO had a net margin of 16.66% and a return on equity of 14.44%. During the same period in the previous year, the company earned $0.51 earnings per share. On average, equities research analysts predict that HEICO Co. will post 2.61 EPS for the current year.

The business also recently disclosed a Semi-Annual dividend, which was paid on Friday, July 15th. Stockholders of record on Friday, July 1st were issued a dividend of $0.09 per share. This represents a dividend yield of 0.1%. The ex-dividend date was Thursday, June 30th. HEICO’s dividend payout ratio (DPR) is presently 7.41%. 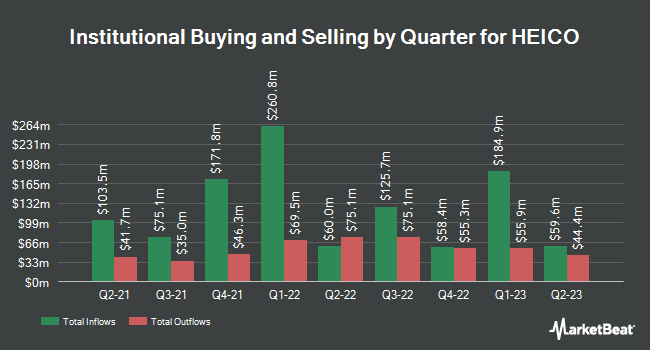 Receive News & Ratings for HEICO Daily - Enter your email address below to receive a concise daily summary of the latest news and analysts' ratings for HEICO and related companies with MarketBeat.com's FREE daily email newsletter.

Becton, Dickinson and Given New $319.00 Price Target at The Goldman Sachs Group

Complete the form below to receive the latest headlines and analysts' recommendations for HEICO with our free daily email newsletter: