In related news, EVP Tolga Tanguler sold 1,754 shares of the business’s stock in a transaction on Tuesday, July 5th. The stock was sold at an average price of $150.00, for a total transaction of $263,100.00. Following the sale, the executive vice president now owns 1,754 shares in the company, valued at approximately $263,100. The sale was disclosed in a filing with the Securities & Exchange Commission, which is available at this hyperlink. 1.40% of the stock is currently owned by corporate insiders.

Alnylam Pharmaceuticals (NASDAQ:ALNY – Get Rating) last issued its quarterly earnings results on Thursday, July 28th. The biopharmaceutical company reported ($2.29) earnings per share (EPS) for the quarter, missing the consensus estimate of ($1.62) by ($0.67). Alnylam Pharmaceuticals had a negative net margin of 110.91% and a negative return on equity of 204.18%. The business had revenue of $224.80 million during the quarter, compared to the consensus estimate of $256.06 million. During the same quarter in the previous year, the business posted ($1.61) EPS. The company’s revenue for the quarter was up 1.9% on a year-over-year basis. Equities analysts anticipate that Alnylam Pharmaceuticals, Inc. will post -7.06 EPS for the current fiscal year. 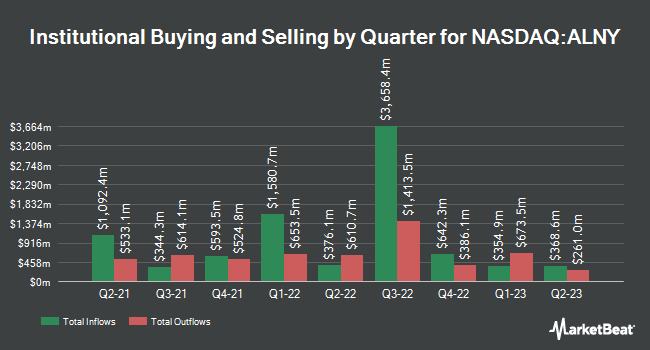 Complete the form below to receive the latest headlines and analysts' recommendations for Alnylam Pharmaceuticals with our free daily email newsletter: