DoorDash, Inc. (NYSE:DASH – Get Rating) has received an average recommendation of “Moderate Buy” from the twenty-four research firms that are covering the firm, MarketBeat.com reports. Nine research analysts have rated the stock with a hold rating, ten have assigned a buy rating and one has issued a strong buy rating on the company. The average 12-month target price among brokers that have covered the stock in the last year is $139.24.

DoorDash (NYSE:DASH – Get Rating) last released its quarterly earnings data on Thursday, May 5th. The company reported ($0.48) EPS for the quarter, missing the consensus estimate of ($0.38) by ($0.10). DoorDash had a negative net margin of 9.97% and a negative return on equity of 11.29%. The business had revenue of $1.46 billion for the quarter, compared to analysts’ expectations of $1.38 billion. During the same period last year, the company earned ($0.34) earnings per share. DoorDash’s revenue for the quarter was up 35.2% compared to the same quarter last year. On average, research analysts anticipate that DoorDash will post -1.64 EPS for the current fiscal year.

Institutional Investors Weigh In On DoorDash

DoorDash, Inc operates a logistics platform that connects merchants, consumers, and dashers in the United States and internationally. It operates DoorDash marketplace, which provides an array of services that enable merchants to solve mission-critical challenges, such as customer acquisition, delivery, insights and analytics, merchandising, payment processing, and customer support; and offers DoorDash Drive, a white-label logistics service; DoorDash Storefront that enables merchants to offer consumers on-demand access to e-commerce. 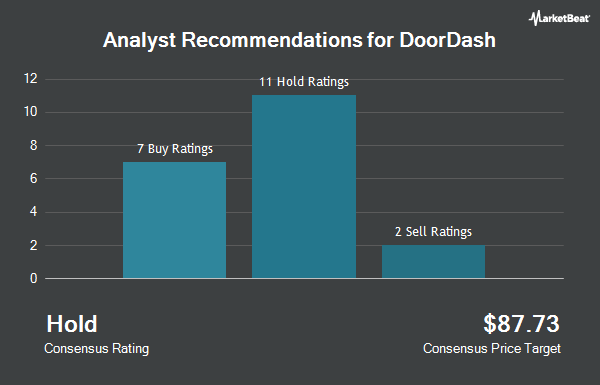 Receive News & Ratings for DoorDash Daily - Enter your email address below to receive a concise daily summary of the latest news and analysts' ratings for DoorDash and related companies with MarketBeat.com's FREE daily email newsletter.

Complete the form below to receive the latest headlines and analysts' recommendations for DoorDash with our free daily email newsletter: