Forward Air (NASDAQ:FWRD – Get Rating) last announced its earnings results on Wednesday, July 27th. The transportation company reported $2.04 EPS for the quarter, beating the consensus estimate of $2.02 by $0.02. The company had revenue of $515.22 million during the quarter, compared to the consensus estimate of $515.72 million. Forward Air had a net margin of 8.71% and a return on equity of 27.62%. The firm’s revenue for the quarter was up 22.5% on a year-over-year basis. During the same quarter in the prior year, the company posted $1.11 earnings per share. Equities research analysts forecast that Forward Air will post 6.78 EPS for the current fiscal year.

The firm also recently announced a quarterly dividend, which will be paid on Thursday, September 8th. Shareholders of record on Thursday, August 18th will be given a dividend of $0.24 per share. The ex-dividend date is Wednesday, August 17th. This represents a $0.96 dividend on an annualized basis and a yield of 0.91%. Forward Air’s dividend payout ratio is presently 16.13%.

Forward Air Corporation, together with its subsidiaries, operates as an asset-light freight and logistics company in the United States and Canada. It operates in two segments, Expedited Freight and Intermodal. The Expedited Freight segment provides expedited regional, inter-regional, and national less-than-truckload services; local pick-up and delivery services; and other services, which include final mile, truckload, shipment consolidation and deconsolidation, warehousing, customs brokerage, and other handling. 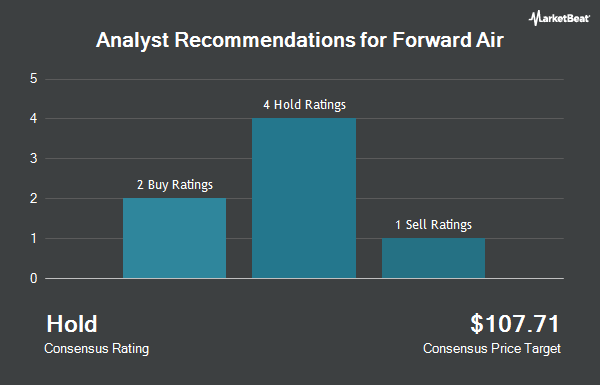 Complete the form below to receive the latest headlines and analysts' recommendations for Forward Air with our free daily email newsletter: