Insider Activity at Jack in the Box

In related news, CEO Darin S. Harris sold 743 shares of the business’s stock in a transaction that occurred on Thursday, June 23rd. The shares were sold at an average price of $57.42, for a total value of $42,663.06. Following the completion of the sale, the chief executive officer now directly owns 36,778 shares in the company, valued at $2,111,792.76. The transaction was disclosed in a legal filing with the SEC, which is available through the SEC website. Over the last three months, insiders sold 970 shares of company stock worth $60,126. 1.10% of the stock is owned by company insiders.

Jack in the Box (NASDAQ:JACK – Get Rating) last announced its quarterly earnings data on Thursday, May 26th. The restaurant operator reported $1.16 earnings per share for the quarter, missing the consensus estimate of $1.35 by ($0.19). Jack in the Box had a negative return on equity of 18.18% and a net margin of 10.37%. The company had revenue of $322.29 million for the quarter, compared to analysts’ expectations of $340.81 million. During the same quarter in the previous year, the company earned $1.48 earnings per share. The company’s revenue was up 25.3% on a year-over-year basis. As a group, equities analysts predict that Jack in the Box Inc. will post 5.89 EPS for the current year.

Jack in the Box Announces Dividend

The business also recently announced a quarterly dividend, which was paid on Wednesday, June 22nd. Investors of record on Tuesday, June 7th were issued a $0.44 dividend. The ex-dividend date of this dividend was Monday, June 6th. This represents a $1.76 dividend on an annualized basis and a yield of 2.51%. Jack in the Box’s payout ratio is 30.29%.

About Jack in the Box 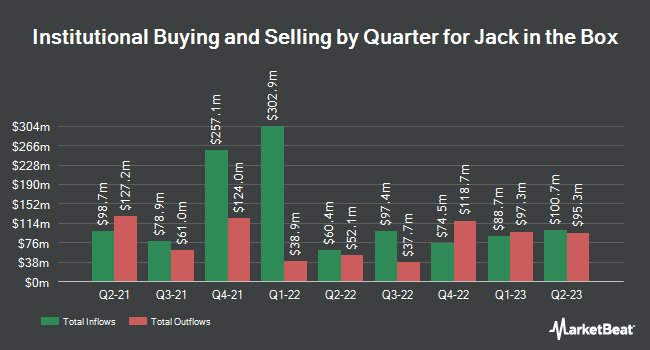