ON Semiconductor (NASDAQ:ON) Price Target Increased to $65.00 by Analysts at Morgan Stanley

ON Semiconductor (NASDAQ:ON – Get Rating) had its target price raised by Morgan Stanley from $56.00 to $65.00 in a report released on Tuesday morning, The Fly reports. They currently have an equal weight rating on the semiconductor company’s stock.

ON Semiconductor (NASDAQ:ON – Get Rating) last announced its earnings results on Monday, August 1st. The semiconductor company reported $1.34 earnings per share for the quarter, topping analysts’ consensus estimates of $1.26 by $0.08. ON Semiconductor had a return on equity of 38.08% and a net margin of 20.13%. The firm had revenue of $2.09 billion for the quarter, compared to the consensus estimate of $2.01 billion. During the same quarter in the previous year, the business earned $0.63 EPS. The company’s revenue was up 24.9% compared to the same quarter last year. On average, equities analysts anticipate that ON Semiconductor will post 4.9 EPS for the current year.

Insider Activity at ON Semiconductor

Institutional Trading of ON Semiconductor

onsemi is engaged in disruptive innovations and also a supplier of power and analog semiconductors. The firm offers vehicle electrification and safety, sustainable energy grids, industrial automation, and 5G and cloud infrastructure, with a focus on automotive and industrial end-markets. It operates through the following segments: Power Solutions Group, Advanced Solutions Group, and Intelligent Sensing Group. 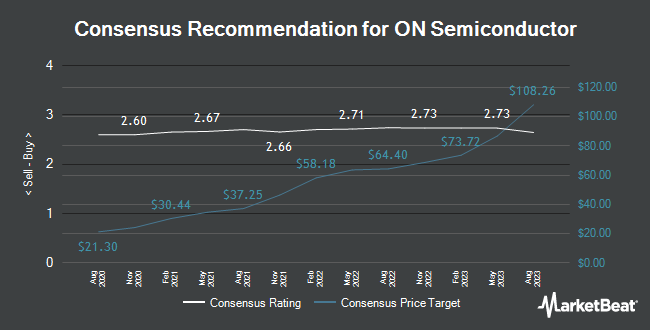 Daily Ratings & News for ON Semiconductor

Complete the form below to receive the latest headlines and analysts' recommendations for ON Semiconductor with our free daily email newsletter: