Steward Partners Investment Advisory LLC grew its position in DICK’S Sporting Goods, Inc. (NYSE:DKS – Get Rating) by 17.6% in the first quarter, according to the company in its most recent 13F filing with the Securities and Exchange Commission (SEC). The firm owned 1,035 shares of the sporting goods retailer’s stock after acquiring an additional 155 shares during the period. Steward Partners Investment Advisory LLC’s holdings in DICK’S Sporting Goods were worth $103,000 at the end of the most recent quarter.

The company also recently disclosed a quarterly dividend, which was paid on Friday, June 24th. Stockholders of record on Friday, June 10th were given a dividend of $0.488 per share. This represents a $1.95 annualized dividend and a dividend yield of 2.09%. The ex-dividend date of this dividend was Thursday, June 9th. DICK’S Sporting Goods’s dividend payout ratio (DPR) is presently 15.07%.

DICK'S Sporting Goods, Inc, together with its subsidiaries, operates as a sporting goods retailer primarily in the eastern United States. The company provides hardlines, including sporting goods equipment, fitness equipment, golf equipment, and hunting and fishing gear products; apparel; and footwear and accessories.

Want to see what other hedge funds are holding DKS? Visit HoldingsChannel.com to get the latest 13F filings and insider trades for DICK’S Sporting Goods, Inc. (NYSE:DKS – Get Rating). 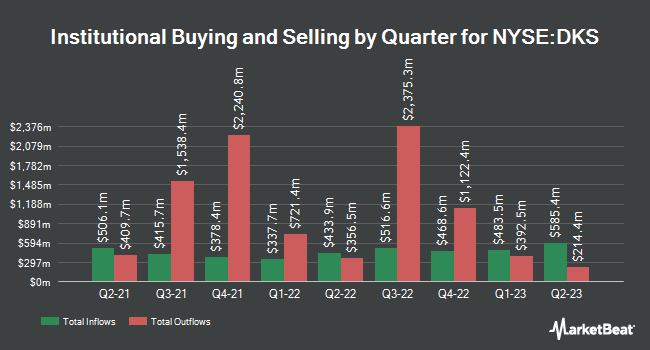 Complete the form below to receive the latest headlines and analysts' recommendations for DICK'S Sporting Goods with our free daily email newsletter: