Axonics (NASDAQ:AXNX – Get Rating) had its price target lifted by equities research analysts at Wells Fargo & Company from $80.00 to $87.00 in a research note issued on Tuesday, The Fly reports. The brokerage currently has an “overweight” rating on the stock. Wells Fargo & Company‘s price target points to a potential upside of 25.36% from the company’s current price.

Want More Great Investing Ideas?
Axonics (NASDAQ:AXNX – Get Rating) last posted its quarterly earnings data on Monday, August 1st. The company reported ($0.47) EPS for the quarter, beating analysts’ consensus estimates of ($0.57) by $0.10. Axonics had a negative net margin of 35.19% and a negative return on equity of 15.99%. The company had revenue of $68.98 million during the quarter, compared to the consensus estimate of $60.05 million. During the same quarter in the prior year, the company posted ($0.59) EPS. The company’s quarterly revenue was up 50.4% compared to the same quarter last year. As a group, equities research analysts anticipate that Axonics will post -2.18 EPS for the current year.

In other news, Director Jane E. Kiernan sold 5,250 shares of the stock in a transaction that occurred on Tuesday, July 5th. The stock was sold at an average price of $60.00, for a total transaction of $315,000.00. Following the completion of the transaction, the director now directly owns 14,761 shares in the company, valued at approximately $885,660. The transaction was disclosed in a document filed with the SEC, which is accessible through this link. Company insiders own 2.31% of the company’s stock.

Institutional Investors Weigh In On Axonics 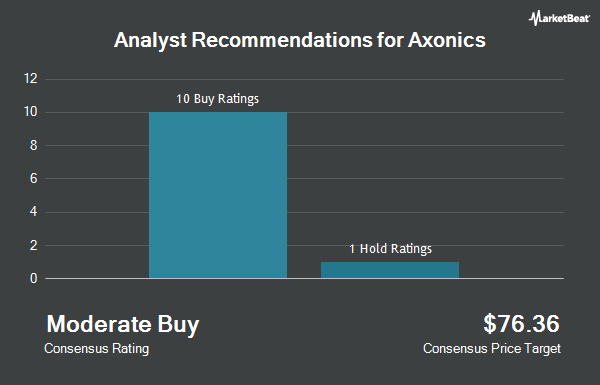