Repligen Co. (NASDAQ:RGEN – Get Rating) CFO Jon Snodgres sold 2,000 shares of the company’s stock in a transaction that occurred on Monday, August 1st. The shares were sold at an average price of $220.00, for a total transaction of $440,000.00. Following the completion of the transaction, the chief financial officer now owns 37,187 shares of the company’s stock, valued at approximately $8,181,140. The transaction was disclosed in a filing with the Securities & Exchange Commission, which can be accessed through the SEC website.

Repligen (NASDAQ:RGEN – Get Rating) last issued its quarterly earnings data on Tuesday, August 2nd. The biotechnology company reported $0.91 earnings per share for the quarter, beating the consensus estimate of $0.72 by $0.19. Repligen had a net margin of 19.86% and a return on equity of 11.13%. The company had revenue of $207.63 million for the quarter, compared to analyst estimates of $189.06 million. During the same period in the prior year, the firm earned $0.79 earnings per share. The company’s revenue was up 27.4% on a year-over-year basis. Analysts predict that Repligen Co. will post 3.1 earnings per share for the current fiscal year.

Hedge Funds Weigh In On Repligen

Repligen Corporation develops and commercializes bioprocessing technologies and systems for use in biological drug manufacturing process in North America, Europe, the Asia Pacific, and internationally. It offers Protein A ligands that are the binding components of Protein A affinity chromatography resins; and cell culture growth factor products. 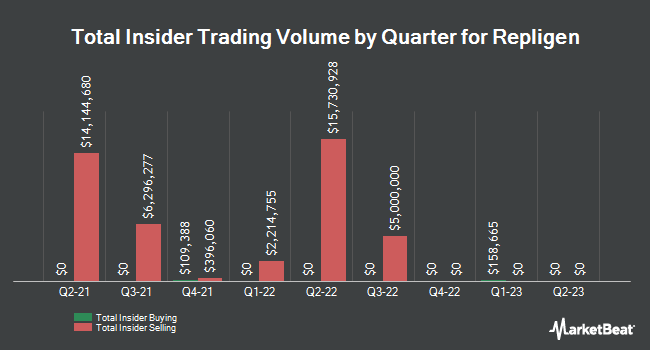 Receive News & Ratings for Repligen Daily - Enter your email address below to receive a concise daily summary of the latest news and analysts' ratings for Repligen and related companies with MarketBeat.com's FREE daily email newsletter.

Complete the form below to receive the latest headlines and analysts' recommendations for Repligen with our free daily email newsletter: