Northland Securities assumed coverage on shares of Plug Power (NASDAQ:PLUG – Get Rating) in a note issued to investors on Tuesday, MarketBeat reports. The firm set a “market perform” rating and a $25.00 price target on the electronics maker’s stock. Northland Securities’ price target points to a potential upside of 6.11% from the stock’s current price.

Plug Power (NASDAQ:PLUG – Get Rating) last issued its quarterly earnings data on Monday, May 9th. The electronics maker reported ($0.27) earnings per share (EPS) for the quarter, missing analysts’ consensus estimates of ($0.16) by ($0.11). Plug Power had a negative return on equity of 11.78% and a negative net margin of 97.29%. The company had revenue of $140.80 million for the quarter, compared to analysts’ expectations of $142.99 million. During the same period last year, the company posted ($0.12) EPS. The business’s revenue for the quarter was up 95.7% on a year-over-year basis. As a group, equities research analysts predict that Plug Power will post -0.76 earnings per share for the current year. 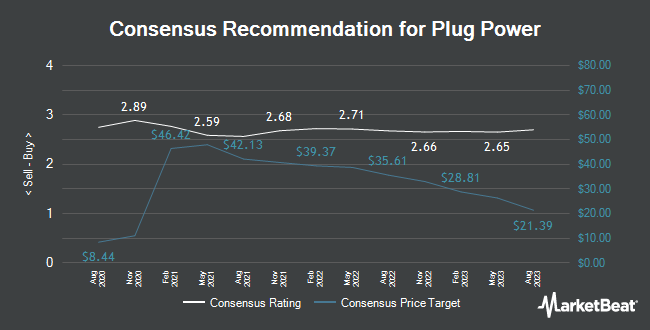 Alarm.com Rating Increased to B- at TheStreet

Dutch Bros Price Target Increased to $37.00 by Analysts at Barclays

Complete the form below to receive the latest headlines and analysts' recommendations for Plug Power with our free daily email newsletter: