Carter’s, Inc. (NYSE:CRI – Get Rating) – Research analysts at B. Riley lowered their Q3 2022 earnings per share (EPS) estimates for Carter’s in a research note issued to investors on Monday, August 1st. B. Riley analyst S. Anderson now expects that the textile maker will earn $1.68 per share for the quarter, down from their prior forecast of $2.42. The consensus estimate for Carter’s’ current full-year earnings is $7.16 per share. B. Riley also issued estimates for Carter’s’ FY2022 earnings at $7.46 EPS and FY2023 earnings at $8.24 EPS.

Carter’s (NYSE:CRI – Get Rating) last released its quarterly earnings data on Friday, July 29th. The textile maker reported $1.30 earnings per share for the quarter, missing analysts’ consensus estimates of $1.63 by ($0.33). The business had revenue of $700.60 million during the quarter, compared to the consensus estimate of $744.31 million. Carter’s had a return on equity of 32.27% and a net margin of 8.35%. The business’s revenue was down 6.1% on a year-over-year basis. During the same period last year, the company earned $1.67 EPS.

Insider Buying and Selling at Carter’s

In related news, Director William J. Montgoris acquired 1,000 shares of the firm’s stock in a transaction on Friday, May 20th. The shares were acquired at an average cost of $75.00 per share, for a total transaction of $75,000.00. Following the completion of the transaction, the director now directly owns 39,525 shares in the company, valued at approximately $2,964,375. The transaction was disclosed in a filing with the SEC, which can be accessed through this hyperlink. Company insiders own 3.60% of the company’s stock.

The business also recently disclosed a quarterly dividend, which was paid on Friday, June 10th. Shareholders of record on Tuesday, May 31st were given a dividend of $0.75 per share. The ex-dividend date was Friday, May 27th. This represents a $3.00 dividend on an annualized basis and a yield of 3.66%. Carter’s’s dividend payout ratio (DPR) is presently 43.92%.

Carter's, Inc, together with its subsidiaries, designs, sources, and markets branded childrenswear under the Carter's, OshKosh, Skip Hop, Child of Mine, Just One You, Simple Joys, Carter's My First Love, little planet, and other brands in the United States and internationally. The company operates through three segments: U.S. 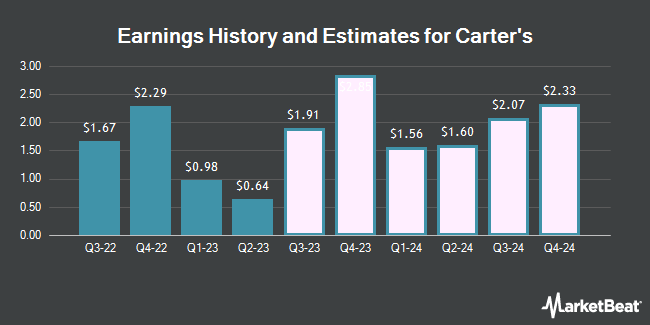 Receive News & Ratings for Carter's Daily - Enter your email address below to receive a concise daily summary of the latest news and analysts' ratings for Carter's and related companies with MarketBeat.com's FREE daily email newsletter.

Complete the form below to receive the latest headlines and analysts' recommendations for Carter's with our free daily email newsletter: