Plains All American Pipeline (NYSE:PAA – Get Rating) last issued its earnings results on Wednesday, May 4th. The pipeline company reported $0.31 earnings per share for the quarter, missing the consensus estimate of $0.37 by ($0.06). The firm had revenue of $13.69 billion during the quarter, compared to analysts’ expectations of $12.15 billion. Plains All American Pipeline had a net margin of 0.65% and a return on equity of 9.80%. The firm’s revenue was up 63.4% on a year-over-year basis. During the same period in the previous year, the firm earned $0.25 EPS.

Plains All American Pipeline Stock Up 0.1 %

Hedge Funds Weigh In On Plains All American Pipeline

In other news, Director Kevin S. Mccarthy acquired 200,000 shares of the company’s stock in a transaction that occurred on Thursday, June 23rd. The shares were acquired at an average price of $9.81 per share, with a total value of $1,962,000.00. Following the acquisition, the director now directly owns 200,000 shares in the company, valued at $1,962,000. The acquisition was disclosed in a document filed with the SEC, which can be accessed through the SEC website. Corporate insiders own 0.69% of the company’s stock.

The company also recently disclosed a quarterly dividend, which will be paid on Friday, August 12th. Investors of record on Friday, July 29th will be issued a $0.2175 dividend. The ex-dividend date of this dividend is Thursday, July 28th. This represents a $0.87 dividend on an annualized basis and a dividend yield of 8.00%. Plains All American Pipeline’s dividend payout ratio (DPR) is presently 378.26%.

About Plains All American Pipeline

Plains All American Pipeline, L.P., through its subsidiaries, engages in the pipeline transportation, terminalling, storage, and gathering of crude oil and natural gas liquids (NGL) in the United States and Canada. The company operates in two segments, Crude Oil and NGL. The Crude Oil segment offers gathering and transporting crude oil through pipelines, gathering systems, trucks, and at times on barges or railcars. 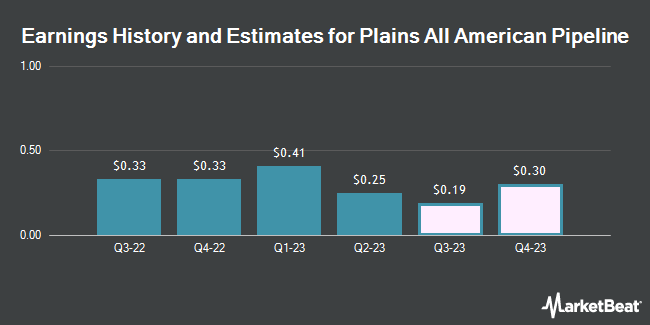 Complete the form below to receive the latest headlines and analysts' recommendations for Plains All American Pipeline with our free daily email newsletter: