Shell Asset Management Co. decreased its position in Red Rock Resorts, Inc. (NASDAQ:RRR – Get Rating) by 12.9% during the first quarter, according to the company in its most recent disclosure with the Securities & Exchange Commission. The firm owned 9,519 shares of the company’s stock after selling 1,409 shares during the quarter. Shell Asset Management Co.’s holdings in Red Rock Resorts were worth $462,000 as of its most recent SEC filing.

Red Rock Resorts (NASDAQ:RRR – Get Rating) last announced its quarterly earnings results on Tuesday, May 3rd. The company reported $0.77 earnings per share for the quarter, beating analysts’ consensus estimates of $0.53 by $0.24. Red Rock Resorts had a net margin of 21.30% and a return on equity of 81.97%. The firm had revenue of $401.64 million during the quarter, compared to analysts’ expectations of $408.32 million. During the same period in the previous year, the company earned $0.98 earnings per share. Red Rock Resorts’s quarterly revenue was up 13.9% compared to the same quarter last year. As a group, sell-side analysts anticipate that Red Rock Resorts, Inc. will post 2 EPS for the current year. 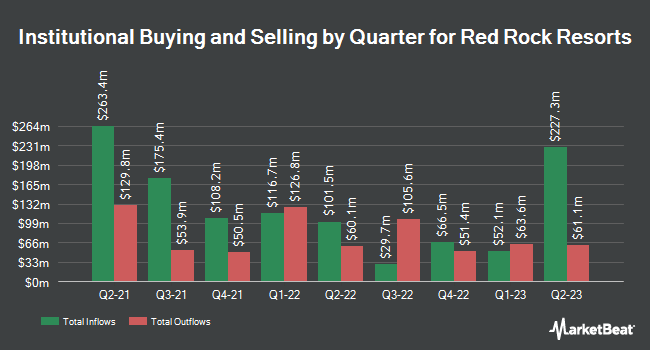 Complete the form below to receive the latest headlines and analysts' recommendations for Red Rock Resorts with our free daily email newsletter: