Vector Group (NYSE:VGR – Get Rating) is scheduled to issue its quarterly earnings data before the market opens on Friday, August 5th. Analysts expect the company to announce earnings of $0.34 per share for the quarter. Investors that wish to register for the company’s conference call can do so using this link.

Vector Group (NYSE:VGR – Get Rating) last issued its quarterly earnings data on Tuesday, May 10th. The company reported $0.17 earnings per share for the quarter, missing analysts’ consensus estimates of $0.25 by ($0.08). The firm had revenue of $312.04 million for the quarter, compared to analysts’ expectations of $285.70 million. Vector Group had a net margin of 10.96% and a negative return on equity of 30.49%. On average, analysts expect Vector Group to post $1 EPS for the current fiscal year and $1 EPS for the next fiscal year.

The company also recently disclosed a quarterly dividend, which was paid on Wednesday, June 29th. Stockholders of record on Friday, June 17th were given a dividend of $0.20 per share. The ex-dividend date was Thursday, June 16th. This represents a $0.80 dividend on an annualized basis and a dividend yield of 7.05%. Vector Group’s payout ratio is 55.94%.

In other news, Director Ronald J. Bernstein sold 10,000 shares of Vector Group stock in a transaction on Thursday, May 12th. The shares were sold at an average price of $11.55, for a total transaction of $115,500.00. Following the completion of the sale, the director now directly owns 62,630 shares in the company, valued at $723,376.50. The transaction was disclosed in a legal filing with the Securities & Exchange Commission, which is available at this link. Corporate insiders own 7.54% of the company’s stock.

Vector Group Ltd., through its subsidiaries, manufactures and sells cigarettes in the United States. It operates in two segments, Tobacco and Real Estate. The company produces cigarettes in 100 combinations under the EAGLE 20's, Pyramid, Montego, Grand Prix, Liggett Select, Eve, and USA brand names, as well as various partner and private label brands. 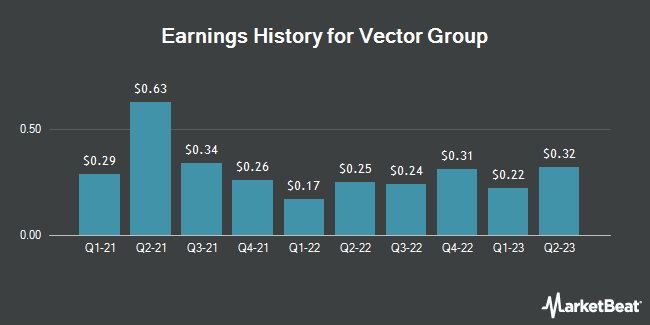 Complete the form below to receive the latest headlines and analysts' recommendations for Vector Group with our free daily email newsletter: