AtriCure (NASDAQ:ATRC – Get Rating) had its target price dropped by research analysts at Piper Sandler from $90.00 to $55.00 in a research report issued on Wednesday, Benzinga reports. The firm currently has an “overweight” rating on the medical device company’s stock. Piper Sandler’s target price suggests a potential upside of 12.47% from the stock’s current price.

AtriCure (NASDAQ:ATRC – Get Rating) last released its earnings results on Tuesday, August 2nd. The medical device company reported ($0.32) earnings per share for the quarter, missing analysts’ consensus estimates of ($0.30) by ($0.02). AtriCure had a negative return on equity of 11.34% and a net margin of 17.62%. During the same quarter last year, the business posted ($0.30) EPS. Analysts expect that AtriCure will post -1.07 EPS for the current fiscal year.

In related news, insider Tonya Austin sold 3,203 shares of the company’s stock in a transaction dated Friday, May 13th. The shares were sold at an average price of $42.69, for a total value of $136,736.07. Following the sale, the insider now owns 17,621 shares of the company’s stock, valued at $752,240.49. The transaction was disclosed in a legal filing with the SEC, which is accessible through this hyperlink. 2.80% of the stock is currently owned by insiders. 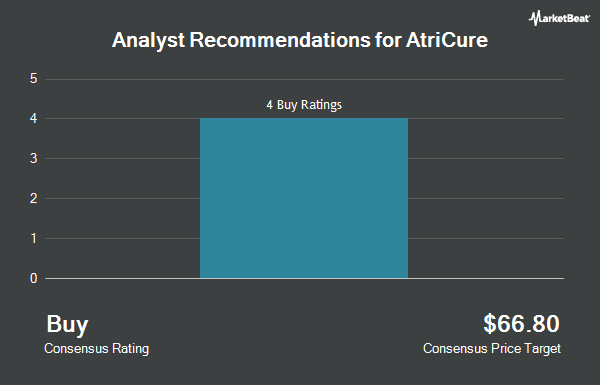