Victory Capital Management Inc. boosted its holdings in shares of Brown & Brown, Inc. (NYSE:BRO – Get Rating) by 5.1% during the first quarter, according to its most recent Form 13F filing with the Securities and Exchange Commission (SEC). The institutional investor owned 331,976 shares of the financial services provider’s stock after buying an additional 16,013 shares during the period. Victory Capital Management Inc. owned about 0.12% of Brown & Brown worth $20,576,000 as of its most recent SEC filing.

In related news, Director Lawrence L. Gellerstedt III bought 1,800 shares of the firm’s stock in a transaction dated Thursday, May 19th. The stock was bought at an average cost of $54.95 per share, for a total transaction of $98,910.00. Following the transaction, the director now owns 12,884 shares of the company’s stock, valued at $707,975.80. The transaction was disclosed in a document filed with the SEC, which is available through the SEC website. Corporate insiders own 17.02% of the company’s stock.

Brown & Brown (NYSE:BRO – Get Rating) last announced its quarterly earnings data on Monday, July 25th. The financial services provider reported $0.51 earnings per share for the quarter, topping the consensus estimate of $0.49 by $0.02. The firm had revenue of $838.70 million during the quarter, compared to analysts’ expectations of $803.46 million. Brown & Brown had a return on equity of 15.36% and a net margin of 18.86%. The company’s quarterly revenue was up 15.5% compared to the same quarter last year. During the same period in the previous year, the business posted $0.49 EPS. Equities analysts predict that Brown & Brown, Inc. will post 2.31 earnings per share for the current year. 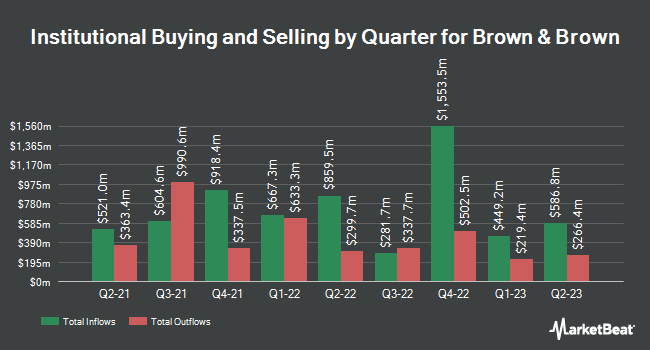 Complete the form below to receive the latest headlines and analysts' recommendations for Brown & Brown with our free daily email newsletter: