AMETEK (NYSE:AME – Get Rating) had its price objective boosted by Morgan Stanley from $135.00 to $145.00 in a research report released on Wednesday, MarketBeat.com reports. Morgan Stanley currently has an overweight rating on the technology company’s stock.

Want More Great Investing Ideas?
AMETEK (NYSE:AME – Get Rating) last released its earnings results on Tuesday, August 2nd. The technology company reported $1.38 earnings per share (EPS) for the quarter, topping analysts’ consensus estimates of $1.29 by $0.09. AMETEK had a net margin of 18.49% and a return on equity of 18.20%. The business had revenue of $1.51 billion during the quarter, compared to analyst estimates of $1.46 billion. During the same quarter in the prior year, the firm earned $1.15 earnings per share. The company’s revenue for the quarter was up 9.2% compared to the same quarter last year. On average, sell-side analysts predict that AMETEK will post 5.5 EPS for the current fiscal year.

AMETEK announced that its Board of Directors has authorized a stock repurchase plan on Friday, May 6th that authorizes the company to buyback $1.00 billion in shares. This buyback authorization authorizes the technology company to purchase up to 3.6% of its stock through open market purchases. Stock buyback plans are often a sign that the company’s board of directors believes its stock is undervalued.

The firm also recently announced a quarterly dividend, which will be paid on Friday, September 30th. Shareholders of record on Wednesday, September 14th will be paid a $0.22 dividend. This represents a $0.88 dividend on an annualized basis and a yield of 0.70%. AMETEK’s dividend payout ratio is currently 18.72%. 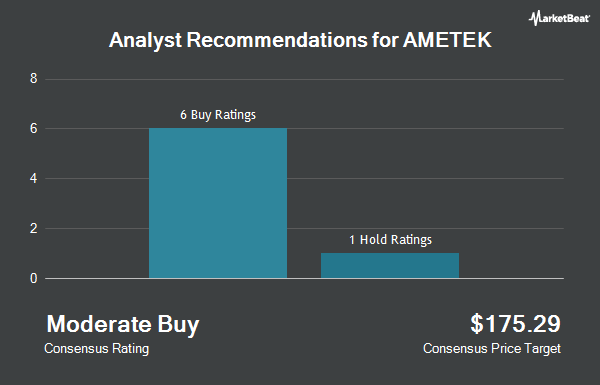 Receive News & Ratings for AMETEK Daily - Enter your email address below to receive a concise daily summary of the latest news and analysts' ratings for AMETEK and related companies with MarketBeat.com's FREE daily email newsletter.

Complete the form below to receive the latest headlines and analysts' recommendations for AMETEK with our free daily email newsletter: