LCI Industries (NYSE:LCII – Get Rating) last posted its earnings results on Tuesday, May 10th. The company reported $7.71 EPS for the quarter, topping the consensus estimate of $4.48 by $3.23. LCI Industries had a net margin of 8.93% and a return on equity of 41.58%. The firm had revenue of $1.64 billion during the quarter, compared to analysts’ expectations of $1.40 billion. During the same quarter in the prior year, the firm earned $2.93 EPS. LCI Industries’s quarterly revenue was up 64.4% on a year-over-year basis.

The firm also recently announced a quarterly dividend, which was paid on Friday, June 17th. Investors of record on Friday, June 3rd were paid a dividend of $1.05 per share. The ex-dividend date was Thursday, June 2nd. This is a positive change from LCI Industries’s previous quarterly dividend of $0.90. This represents a $4.20 annualized dividend and a yield of 3.25%. LCI Industries’s dividend payout ratio is currently 21.56%.

In related news, EVP Nick C. Fletcher sold 3,597 shares of the company’s stock in a transaction that occurred on Friday, May 27th. The shares were sold at an average price of $117.45, for a total value of $422,467.65. The sale was disclosed in a filing with the Securities & Exchange Commission, which is accessible through the SEC website. Company insiders own 3.00% of the company’s stock.

LCI Industries, together with its subsidiaries, manufactures and supplies components for the manufacturers of recreational vehicles (RVs) and adjacent industries in the United States and internationally. It operates in two segments, Original Equipment Manufacturers (OEM) and Aftermarket. The OEM segment manufactures and distributes a range of engineered components, such as steel chassis and related components; axles and suspension solutions; slide-out mechanisms and solutions; thermoformed bath, kitchen, and other products; vinyl, aluminum, and frameless windows; manual, electric, and hydraulic stabilizer and leveling systems; entry, luggage, patio, and ramp doors; furniture and mattresses; electric and manual entry steps; awnings and awning accessories; towing products; truck accessories; electronic components; appliances; air conditioners; televisions and sound systems; and other accessories. 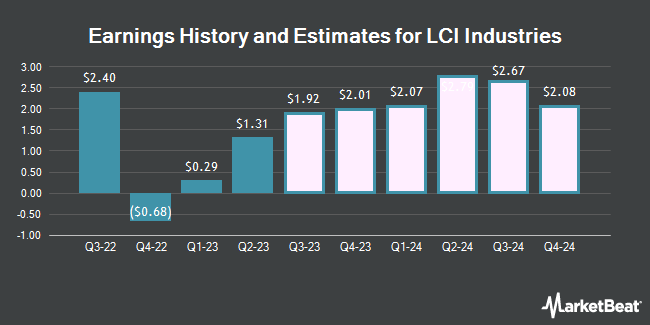