i3 Verticals (IIIV) to Release Earnings on Monday

i3 Verticals (NASDAQ:IIIV – Get Rating) will be posting its quarterly earnings results after the market closes on Monday, August 8th. Analysts expect i3 Verticals to post earnings of $0.36 per share for the quarter. i3 Verticals has set its FY 2022 guidance at $1.40-$1.47 EPS.Individual interested in registering for the company’s earnings conference call can do so using this link.

i3 Verticals (NASDAQ:IIIV – Get Rating) last posted its quarterly earnings data on Monday, May 9th. The company reported $0.23 earnings per share for the quarter, topping the consensus estimate of $0.11 by $0.12. i3 Verticals had a positive return on equity of 8.01% and a negative net margin of 4.87%. The business had revenue of $78.12 million during the quarter, compared to analysts’ expectations of $71.45 million. During the same quarter in the previous year, the firm earned $0.14 EPS. On average, analysts expect i3 Verticals to post $1 EPS for the current fiscal year and $1 EPS for the next fiscal year.

In other i3 Verticals news, CTO Robert Bertke sold 2,324 shares of the company’s stock in a transaction that occurred on Wednesday, June 8th. The stock was sold at an average price of $24.72, for a total value of $57,449.28. The transaction was disclosed in a legal filing with the Securities & Exchange Commission, which is available at the SEC website. 31.90% of the stock is owned by insiders.

Hedge Funds Weigh In On i3 Verticals

Separately, Stephens initiated coverage on i3 Verticals in a research report on Thursday, June 9th. They set an “overweight” rating and a $30.00 price objective for the company. One research analyst has rated the stock with a hold rating, three have issued a buy rating and one has issued a strong buy rating to the company’s stock. According to data from MarketBeat, i3 Verticals currently has an average rating of “Buy” and a consensus target price of $31.50. 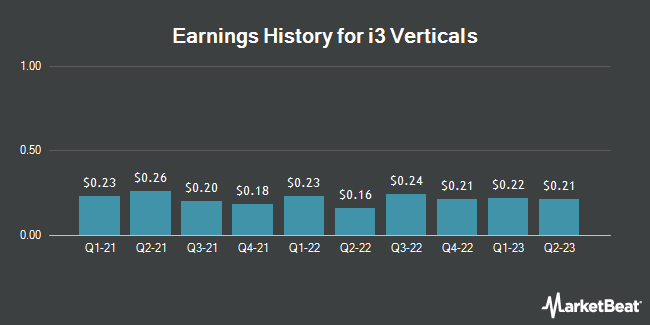