Zendesk, Inc. (NYSE:ZEN – Get Rating) CEO Mikkel Svane sold 101,930 shares of the business’s stock in a transaction that occurred on Tuesday, August 2nd. The stock was sold at an average price of $75.28, for a total value of $7,673,290.40. Following the completion of the transaction, the chief executive officer now directly owns 751,983 shares in the company, valued at $56,609,280.24. The sale was disclosed in a legal filing with the SEC, which is available through this link.

Zendesk (NYSE:ZEN – Get Rating) last announced its quarterly earnings results on Thursday, July 28th. The software maker reported $0.14 earnings per share (EPS) for the quarter, beating the consensus estimate of $0.11 by $0.03. Zendesk had a negative net margin of 18.33% and a negative return on equity of 42.82%. The company had revenue of $407.21 million during the quarter, compared to analyst estimates of $404.68 million. During the same quarter in the previous year, the business earned ($0.35) EPS. The firm’s revenue was up 28.0% on a year-over-year basis. As a group, equities research analysts predict that Zendesk, Inc. will post -1 EPS for the current year.

Several research analysts have recently commented on ZEN shares. Craig Hallum downgraded Zendesk from a “buy” rating to a “hold” rating and reduced their target price for the stock from $140.00 to $77.50 in a report on Wednesday, June 29th. Jefferies Financial Group reduced their target price on Zendesk from $120.00 to $110.00 in a report on Monday, May 23rd. William Blair cut shares of Zendesk from an “outperform” rating to a “market perform” rating in a research report on Tuesday, July 26th. Cowen dropped their price objective on shares of Zendesk to $77.50 in a research report on Monday, July 4th. Finally, Evercore ISI dropped their price objective on shares of Zendesk from $128.00 to $66.00 and set an “in-line” rating for the company in a research report on Friday, June 17th. Fifteen analysts have rated the stock with a hold rating and two have assigned a buy rating to the company. According to MarketBeat.com, the company presently has a consensus rating of “Hold” and a consensus target price of $95.69.

Hedge Funds Weigh In On Zendesk

Zendesk, Inc, a software development company, provides software as a service solutions for organizations in the United States, Europe, the Middle East, Africa, the Asia Pacific, and internationally. Its flagship product is Zendesk Support, a system for tracking, prioritizing, and solving customer support tickets across various channels. 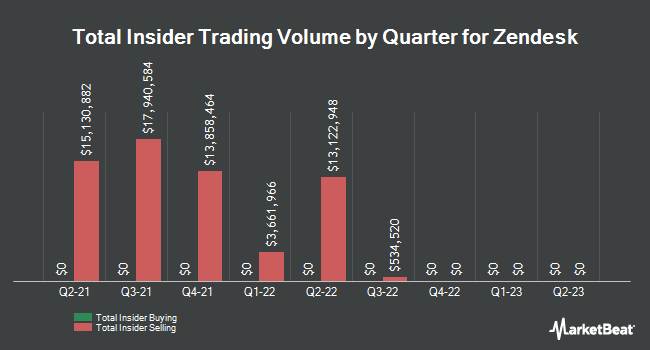 Receive News & Ratings for Zendesk Daily - Enter your email address below to receive a concise daily summary of the latest news and analysts' ratings for Zendesk and related companies with MarketBeat.com's FREE daily email newsletter.

Complete the form below to receive the latest headlines and analysts' recommendations for Zendesk with our free daily email newsletter: