Principal Financial Group Inc. increased its stake in Nikola Co. (NASDAQ:NKLA – Get Rating) by 6.9% during the first quarter, HoldingsChannel reports. The firm owned 41,491 shares of the company’s stock after acquiring an additional 2,665 shares during the period. Principal Financial Group Inc.’s holdings in Nikola were worth $444,000 as of its most recent filing with the Securities and Exchange Commission.

Want More Great Investing Ideas?
Nikola (NASDAQ:NKLA – Get Rating) last posted its quarterly earnings results on Thursday, August 4th. The company reported ($0.25) earnings per share (EPS) for the quarter, beating the consensus estimate of ($0.27) by $0.02. The business had revenue of $18.10 million for the quarter, compared to analysts’ expectations of $16.58 million. During the same quarter in the previous year, the company earned ($0.36) earnings per share. The business’s quarterly revenue was up 1710.0% on a year-over-year basis. As a group, research analysts anticipate that Nikola Co. will post -1.89 EPS for the current fiscal year.

Insider Buying and Selling at Nikola

In other Nikola news, major shareholder Trevor R. Milton purchased 3,000,000 shares of the business’s stock in a transaction on Wednesday, August 24th. The stock was acquired at an average cost of $5.80 per share, for a total transaction of $17,400,000.00. Following the completion of the transaction, the insider now directly owns 51,047,726 shares in the company, valued at approximately $296,076,810.80. The transaction was disclosed in a legal filing with the SEC, which is accessible through this link. Company insiders own 18.30% of the company’s stock.

Nikola Corporation operates as a technology innovator and integrator that works to develop energy and transportation solutions. It operates through two business units, Truck and Energy. The Truck business unit develops and commercializes battery hydrogen-electric and battery-electric semi-trucks to the trucking sector.

Want to see what other hedge funds are holding NKLA? Visit HoldingsChannel.com to get the latest 13F filings and insider trades for Nikola Co. (NASDAQ:NKLA – Get Rating). 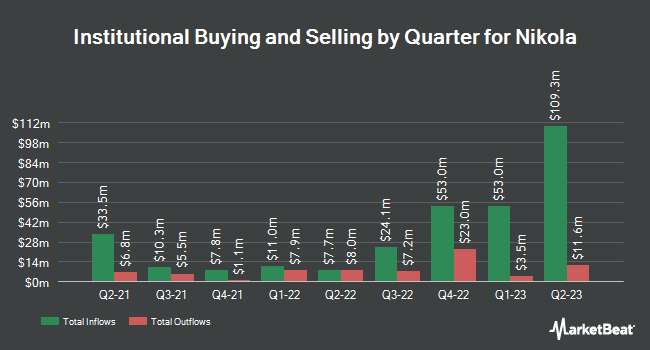 Receive News & Ratings for Nikola Daily - Enter your email address below to receive a concise daily summary of the latest news and analysts' ratings for Nikola and related companies with MarketBeat.com's FREE daily email newsletter.

Complete the form below to receive the latest headlines and analysts' recommendations for Nikola with our free daily email newsletter: