Boise Cascade (NYSE:BCC) Given Average Rating of “Hold” by Analysts

Shares of Boise Cascade (NYSE:BCC – Get Rating) have earned a consensus rating of “Hold” from the six analysts that are presently covering the company, Marketbeat Ratings reports. Four equities research analysts have rated the stock with a hold recommendation and one has given a buy recommendation to the company. The average 1 year target price among brokers that have issued ratings on the stock in the last year is $72.50.

In other Boise Cascade news, CFO Kelly E. Hibbs sold 3,180 shares of the business’s stock in a transaction dated Friday, August 5th. The stock was sold at an average price of $68.96, for a total transaction of $219,292.80. Following the sale, the chief financial officer now owns 40,736 shares in the company, valued at approximately $2,809,154.56. The transaction was disclosed in a document filed with the SEC, which can be accessed through the SEC website. Company insiders own 0.89% of the company’s stock.

Boise Cascade (NYSE:BCC – Get Rating) last released its quarterly earnings results on Monday, August 1st. The construction company reported $5.49 EPS for the quarter, topping the consensus estimate of $4.64 by $0.85. The firm had revenue of $2.28 billion during the quarter, compared to analyst estimates of $2.16 billion. Boise Cascade had a return on equity of 51.48% and a net margin of 9.45%. The business’s revenue for the quarter was down 6.8% compared to the same quarter last year. During the same period in the previous year, the company posted $7.62 EPS. As a group, equities research analysts anticipate that Boise Cascade will post 20.06 earnings per share for the current fiscal year. 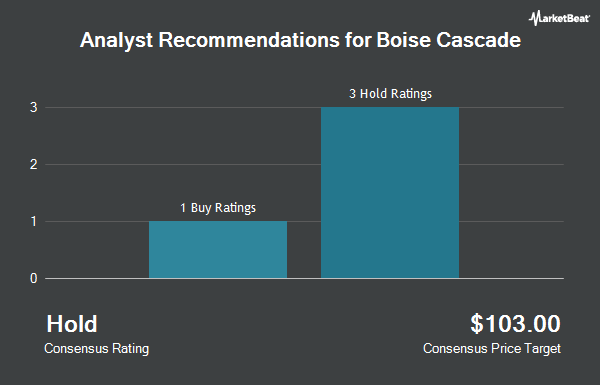 Complete the form below to receive the latest headlines and analysts' recommendations for Boise Cascade with our free daily email newsletter: