Americold Realty Trust, Inc. (NYSE:COLD – Get Rating) has been given an average rating of “Hold” by the ten research firms that are covering the company, Marketbeat reports. One research analyst has rated the stock with a sell recommendation, four have assigned a hold recommendation and three have given a buy recommendation to the company. The average twelve-month target price among brokers that have updated their coverage on the stock in the last year is $32.67.

Americold Realty Trust (NYSE:COLD – Get Rating) last announced its quarterly earnings results on Thursday, August 4th. The company reported $0.01 EPS for the quarter, missing the consensus estimate of $0.22 by ($0.21). Americold Realty Trust had a negative net margin of 0.56% and a negative return on equity of 0.41%. The firm had revenue of $729.76 million during the quarter, compared to the consensus estimate of $715.40 million. During the same period in the previous year, the business earned $0.28 earnings per share. The firm’s revenue for the quarter was up 11.5% on a year-over-year basis. Analysts anticipate that Americold Realty Trust will post 0.94 EPS for the current fiscal year.

The firm also recently declared a quarterly dividend, which will be paid on Friday, October 14th. Shareholders of record on Friday, September 30th will be paid a $0.22 dividend. This represents a $0.88 annualized dividend and a yield of 2.87%. The ex-dividend date of this dividend is Thursday, September 29th. Americold Realty Trust’s dividend payout ratio is presently -1,466.67%.

Americold is the world's largest publicly traded REIT focused on the ownership, operation, acquisition and development of temperature-controlled warehouses. Based in Atlanta, Georgia, Americold owns and operates 185 temperature-controlled warehouses, with over 1 billion refrigerated cubic feet of storage, in the United States, Australia, New Zealand, Canada, and Argentina. 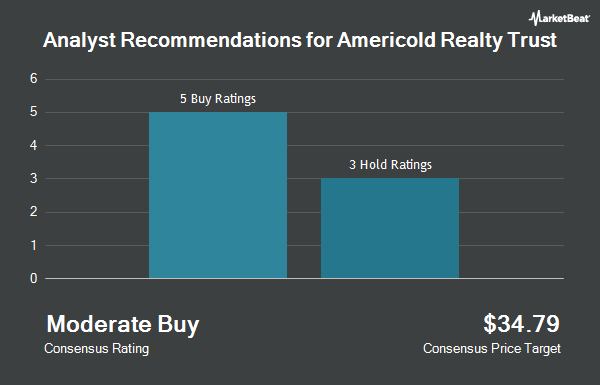 Complete the form below to receive the latest headlines and analysts' recommendations for Americold Realty Trust with our free daily email newsletter: