United States Steel (NYSE:X – Get Rating) had its price objective lifted by Citigroup to $27.00 in a research report sent to investors on Tuesday, Stock Target Advisor reports.

Want More Great Investing Ideas?
United States Steel (NYSE:X – Get Rating) last issued its earnings results on Thursday, July 28th. The basic materials company reported $3.86 earnings per share for the quarter, beating the consensus estimate of $3.85 by $0.01. United States Steel had a net margin of 21.59% and a return on equity of 49.21%. The business had revenue of $6.29 billion for the quarter, compared to analyst estimates of $5.82 billion. During the same period in the previous year, the business earned $3.37 EPS. The firm’s revenue was up 25.2% on a year-over-year basis. As a group, research analysts expect that United States Steel will post 9.92 EPS for the current fiscal year.

The business also recently announced a quarterly dividend, which was paid on Thursday, September 8th. Shareholders of record on Monday, August 8th were paid a $0.05 dividend. This represents a $0.20 dividend on an annualized basis and a dividend yield of 0.89%. The ex-dividend date was Friday, August 5th. United States Steel’s dividend payout ratio is presently 1.17%.

United States Steel announced that its board has authorized a share buyback program on Thursday, July 28th that allows the company to buyback $500.00 million in shares. This buyback authorization allows the basic materials company to purchase up to 8.8% of its shares through open market purchases. Shares buyback programs are usually an indication that the company’s board of directors believes its stock is undervalued. 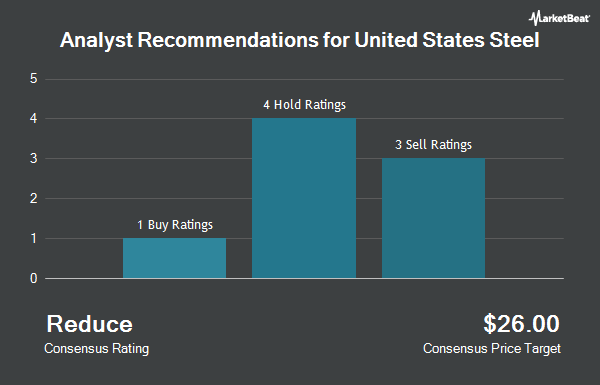