Equities researchers at Truist Financial initiated coverage on shares of Fusion Pharmaceuticals (NASDAQ:FUSN – Get Rating) in a research note issued to investors on Thursday, September 15th, MarketBeat Ratings reports. The brokerage set a “buy” rating on the stock.

A number of other analysts have also commented on FUSN. Jonestrading assumed coverage on Fusion Pharmaceuticals in a report on Tuesday, September 6th. They set a “buy” rating for the company. William Blair assumed coverage on Fusion Pharmaceuticals in a research note on Wednesday, July 6th. They issued an “outperform” rating on the stock. Six equities research analysts have rated the stock with a buy rating, According to data from MarketBeat, the company has a consensus rating of “Buy” and a consensus target price of $18.00.

In other news, Director Steven Gannon acquired 44,400 shares of the company’s stock in a transaction that occurred on Thursday, August 11th. The shares were acquired at an average price of $2.03 per share, for a total transaction of $90,132.00. Following the completion of the purchase, the director now owns 56,400 shares in the company, valued at $114,492. The purchase was disclosed in a document filed with the Securities & Exchange Commission, which is accessible through this link. 7.79% of the stock is owned by company insiders.

Fusion Pharmaceuticals Inc, a clinical-stage oncology company, focuses on developing radiopharmaceuticals as precision medicines. The company has developed Targeted Alpha Therapies platform together with its proprietary Fast-Clear linker technology to enable us to connect alpha particle emitting isotopes to various targeting molecules in order to selectively deliver the alpha particle payloads to tumors. 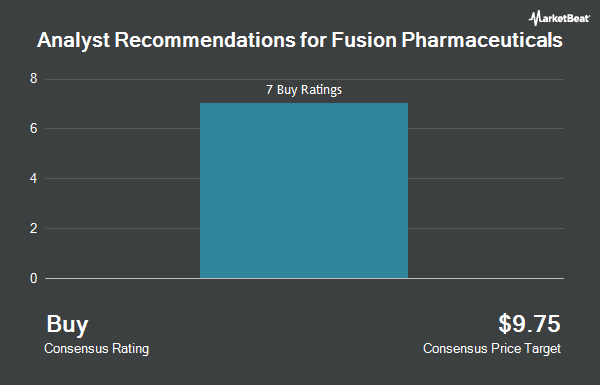 Complete the form below to receive the latest headlines and analysts' recommendations for Fusion Pharmaceuticals with our free daily email newsletter: