Crown Castle Inc. (NYSE:CCI – Get Rating) has been given an average rating of “Moderate Buy” by the sixteen analysts that are currently covering the company, Marketbeat Ratings reports. Two analysts have rated the stock with a sell recommendation, two have assigned a hold recommendation and eight have given a buy recommendation to the company. The average 12 month price target among analysts that have updated their coverage on the stock in the last year is $195.20.

Want More Great Investing Ideas?
Crown Castle (NYSE:CCI – Get Rating) last posted its earnings results on Wednesday, July 20th. The real estate investment trust reported $0.97 earnings per share for the quarter, missing analysts’ consensus estimates of $1.71 by ($0.74). The business had revenue of $1.73 billion during the quarter, compared to the consensus estimate of $1.71 billion. Crown Castle had a net margin of 22.91% and a return on equity of 18.93%. The business’s revenue was up 9.5% compared to the same quarter last year. During the same period in the previous year, the firm earned $1.71 EPS. On average, analysts expect that Crown Castle will post 7.03 EPS for the current year.

The company also recently declared a quarterly dividend, which will be paid on Friday, September 30th. Investors of record on Thursday, September 15th will be issued a $1.47 dividend. This represents a $5.88 annualized dividend and a yield of 3.60%. The ex-dividend date is Wednesday, September 14th. Crown Castle’s dividend payout ratio is 165.17%.

In other Crown Castle news, Director Kevin A. Stephens acquired 699 shares of the business’s stock in a transaction that occurred on Friday, July 22nd. The shares were acquired at an average cost of $173.60 per share, for a total transaction of $121,346.40. Following the completion of the acquisition, the director now directly owns 10,703 shares of the company’s stock, valued at approximately $1,858,040.80. The acquisition was disclosed in a legal filing with the Securities & Exchange Commission, which can be accessed through this hyperlink. Company insiders own 0.47% of the company’s stock.

Crown Castle owns, operates and leases more than 40,000 cell towers and approximately 80,000 route miles of fiber supporting small cells and fiber solutions across every major U.S. market. This nationwide portfolio of communications infrastructure connects cities and communities to essential data, technology and wireless service – bringing information, ideas and innovations to the people and businesses that need them. 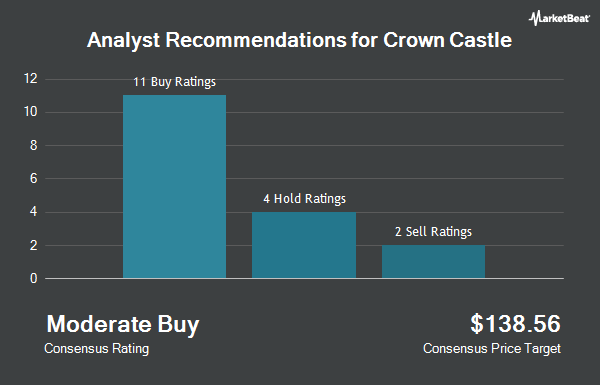 Complete the form below to receive the latest headlines and analysts' recommendations for Crown Castle with our free daily email newsletter: