Boston Scientific Co. (NYSE:BSX – Get Rating) EVP Wendy Carruthers sold 7,500 shares of the stock in a transaction on Thursday, September 15th. The shares were sold at an average price of $42.21, for a total value of $316,575.00. Following the transaction, the executive vice president now directly owns 109,913 shares of the company’s stock, valued at $4,639,427.73. The sale was disclosed in a filing with the Securities & Exchange Commission, which is available at the SEC website.

Want More Great Investing Ideas?
Boston Scientific (NYSE:BSX – Get Rating) last posted its quarterly earnings data on Wednesday, July 27th. The medical equipment provider reported $0.44 earnings per share for the quarter, beating the consensus estimate of $0.42 by $0.02. The business had revenue of $3.24 billion for the quarter, compared to analysts’ expectations of $3.22 billion. Boston Scientific had a return on equity of 14.58% and a net margin of 7.16%. The business’s revenue was up 5.4% on a year-over-year basis. During the same period in the previous year, the firm posted $0.40 EPS. As a group, analysts expect that Boston Scientific Co. will post 1.76 earnings per share for the current fiscal year. 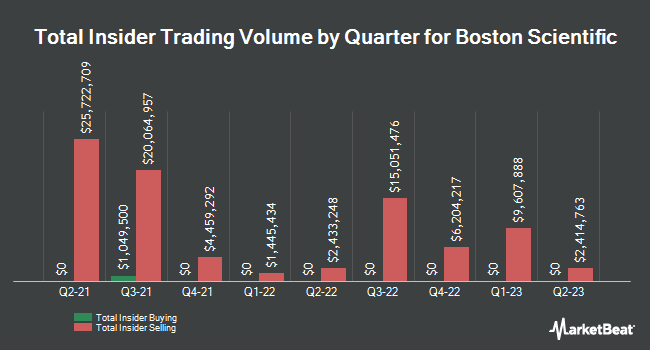