Brigham Minerals, Inc. (NYSE:MNRL – Get Rating) has been assigned a consensus rating of “Buy” from the six analysts that are currently covering the firm, Marketbeat Ratings reports. One research analyst has rated the stock with a hold recommendation, three have issued a buy recommendation and one has assigned a strong buy recommendation to the company. The average twelve-month target price among brokerages that have issued ratings on the stock in the last year is $34.60.

Want More Great Investing Ideas?
Brigham Minerals (NYSE:MNRL – Get Rating) last announced its quarterly earnings data on Thursday, August 4th. The company reported $0.78 EPS for the quarter, topping analysts’ consensus estimates of $0.69 by $0.09. The company had revenue of $90.88 million during the quarter, compared to the consensus estimate of $81.38 million. Brigham Minerals had a net margin of 41.17% and a return on equity of 14.52%. Brigham Minerals’s quarterly revenue was up 27.2% on a year-over-year basis. During the same quarter in the prior year, the firm earned $0.25 EPS. On average, analysts forecast that Brigham Minerals will post 2.74 earnings per share for the current year.

In other Brigham Minerals news, Director Pbra, Llc sold 59,390 shares of the firm’s stock in a transaction dated Tuesday, June 21st. The shares were sold at an average price of $28.15, for a total transaction of $1,671,828.50. The transaction was disclosed in a filing with the Securities & Exchange Commission, which is available through the SEC website. 3.92% of the stock is currently owned by insiders.

Brigham Minerals, Inc owns and operates a portfolio of mineral and royalty interests in the continental United States. The company primarily holds mineral and royalty interests in the Delaware and Midland Basins in West Texas and New Mexico; the South Central Oklahoma Oil Province and Sooner Trend Anadarko Basin Canadian and Kingfisher Counties plays in the Anadarko Basin of Oklahoma; the Denver-Julesburg Basin in Colorado; and Wyoming and the Williston Basin in North Dakota. 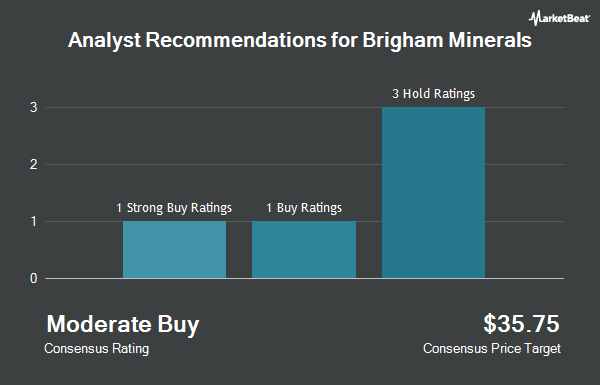 Complete the form below to receive the latest headlines and analysts' recommendations for Brigham Minerals with our free daily email newsletter: