CarGurus, Inc. (NASDAQ:CARG – Get Rating) has been assigned an average recommendation of “Moderate Buy” from the thirteen brokerages that are currently covering the firm, MarketBeat.com reports. Three equities research analysts have rated the stock with a hold rating and six have issued a buy rating on the company. The average twelve-month target price among brokers that have issued a report on the stock in the last year is $34.18.

Want More Great Investing Ideas?
CarGurus (NASDAQ:CARG – Get Rating) last announced its earnings results on Monday, August 8th. The company reported $0.15 earnings per share (EPS) for the quarter, topping analysts’ consensus estimates of $0.11 by $0.04. CarGurus had a positive return on equity of 20.37% and a negative net margin of 0.90%. The business had revenue of $511.20 million for the quarter, compared to analyst estimates of $507.31 million. During the same period in the previous year, the company earned $0.29 earnings per share. The company’s revenue for the quarter was up 134.7% compared to the same quarter last year. Equities analysts anticipate that CarGurus will post 0.31 EPS for the current year.

Insider Buying and Selling at CarGurus

In other CarGurus news, COO Samuel Zales sold 17,707 shares of CarGurus stock in a transaction that occurred on Thursday, July 21st. The stock was sold at an average price of $25.02, for a total value of $443,029.14. Following the completion of the transaction, the chief operating officer now directly owns 392,587 shares in the company, valued at $9,822,526.74. The sale was disclosed in a legal filing with the SEC, which is accessible through this hyperlink. 14.80% of the stock is currently owned by insiders.

Hedge Funds Weigh In On CarGurus 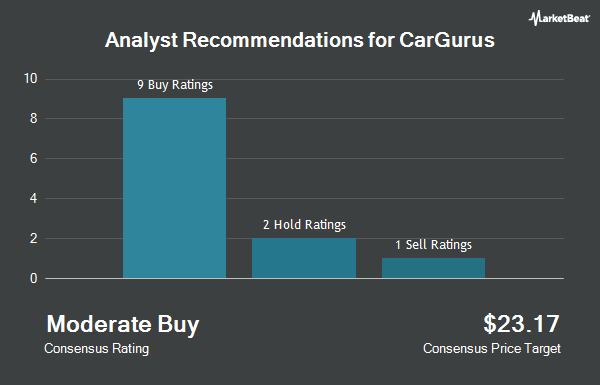