Shares of YETI Holdings, Inc. (NYSE:YETI – Get Rating) have received a consensus recommendation of “Moderate Buy” from the eighteen brokerages that are presently covering the stock, Marketbeat.com reports. Three analysts have rated the stock with a hold rating and eight have issued a buy rating on the company. The average 1 year target price among brokerages that have updated their coverage on the stock in the last year is $63.25.

YETI (NYSE:YETI – Get Rating) last issued its quarterly earnings results on Thursday, August 4th. The company reported $0.58 earnings per share for the quarter, missing the consensus estimate of $0.63 by ($0.05). YETI had a net margin of 13.02% and a return on equity of 43.04%. The company had revenue of $420.04 million for the quarter, compared to the consensus estimate of $422.92 million. During the same quarter in the previous year, the business earned $0.64 earnings per share. YETI’s revenue was up 17.4% compared to the same quarter last year. As a group, equities analysts expect that YETI will post 2.22 EPS for the current fiscal year. 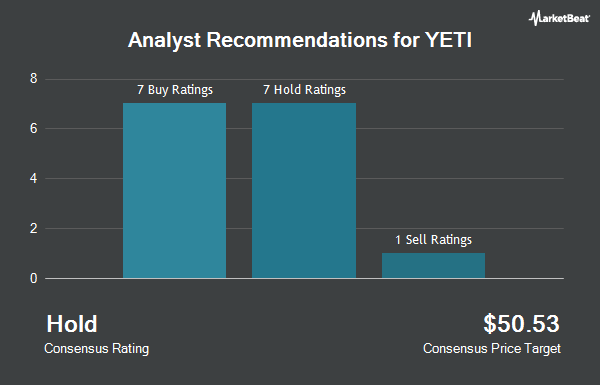 State of Alaska Department of Revenue Has $1.38 Million Stock Position in Hubbell Incorporated

State of Alaska Department of Revenue Has $1.39 Million Stake in M.D.C. Holdings, Inc.