Capital Investment Advisors LLC lifted its holdings in shares of PureCycle Technologies, Inc. (NYSE:PCT – Get Rating) by 51.8% during the second quarter, according to its most recent 13F filing with the Securities and Exchange Commission (SEC). The firm owned 17,575 shares of the company’s stock after purchasing an additional 6,000 shares during the period. Capital Investment Advisors LLC’s holdings in PureCycle Technologies were worth $130,000 at the end of the most recent reporting period.

In other PureCycle Technologies news, Director John Stewart Scott sold 92,000 shares of PureCycle Technologies stock in a transaction dated Monday, June 27th. The stock was sold at an average price of $7.68, for a total transaction of $706,560.00. Following the completion of the transaction, the director now owns 1,435,709 shares of the company’s stock, valued at approximately $11,026,245.12. The transaction was disclosed in a legal filing with the Securities & Exchange Commission, which can be accessed through this link. Insiders sold 256,422 shares of company stock valued at $1,901,996 in the last quarter. 11.10% of the stock is currently owned by corporate insiders.

A number of brokerages recently issued reports on PCT. Cowen lowered their price objective on PureCycle Technologies from $17.00 to $15.00 and set an “outperform” rating on the stock in a research note on Monday, August 15th. Stifel Nicolaus began coverage on PureCycle Technologies in a research note on Thursday, September 15th. They issued a “buy” rating and a $15.00 price objective on the stock.

PureCycle Technologies, Inc produces recycled polypropylene (PP). The company holds a license for restoring waste PP into ultra-pure recycled resin. Its recycling process separates color, odor, and other contaminants from plastic waste feedstock to transform it into virgin-like resin. The company was founded in 2015 and is headquartered in Orlando, Florida. 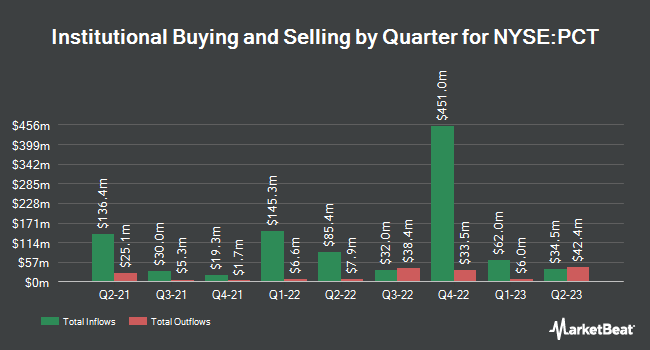 Complete the form below to receive the latest headlines and analysts' recommendations for PureCycle Technologies with our free daily email newsletter: