Moody National Bank Trust Division reduced its position in shares of Uber Technologies, Inc. (NYSE:UBER – Get Rating) by 51.6% in the second quarter, according to its most recent 13F filing with the Securities and Exchange Commission (SEC). The institutional investor owned 14,956 shares of the ride-sharing company’s stock after selling 15,944 shares during the period. Moody National Bank Trust Division’s holdings in Uber Technologies were worth $306,000 at the end of the most recent quarter.

Want More Great Investing Ideas?
In other Uber Technologies news, insider Tony West sold 4,167 shares of Uber Technologies stock in a transaction on Wednesday, September 14th. The stock was sold at an average price of $32.00, for a total transaction of $133,344.00. Following the completion of the transaction, the insider now owns 142,593 shares in the company, valued at $4,562,976. The sale was disclosed in a document filed with the Securities & Exchange Commission, which can be accessed through this link. 3.92% of the stock is currently owned by corporate insiders.

Uber Technologies, Inc develops and operates proprietary technology applications in the United States, Canada, Latin America, Europe, the Middle East, Africa, and the Asia Pacific. It connects consumers with independent providers of ride services for ridesharing services; and connects riders and other consumers with restaurants, grocers, and other stores with delivery service providers for meal preparation, grocery, and other delivery services. 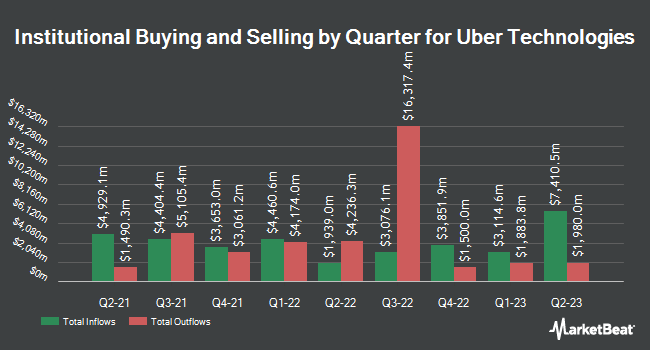 Complete the form below to receive the latest headlines and analysts' recommendations for Uber Technologies with our free daily email newsletter: