Sunrun Inc. (NASDAQ:RUN – Get Rating) insider Jeanna Steele sold 835 shares of the company’s stock in a transaction on Thursday, September 15th. The stock was sold at an average price of $37.35, for a total transaction of $31,187.25. Following the completion of the transaction, the insider now directly owns 157,191 shares in the company, valued at approximately $5,871,083.85. The transaction was disclosed in a filing with the Securities & Exchange Commission, which is accessible through the SEC website.

Want More Great Investing Ideas?
Sunrun (NASDAQ:RUN – Get Rating) last posted its earnings results on Wednesday, August 3rd. The energy company reported ($0.06) earnings per share for the quarter, topping analysts’ consensus estimates of ($0.20) by $0.14. The company had revenue of $584.58 million during the quarter, compared to analyst estimates of $485.04 million. Sunrun had a negative net margin of 5.86% and a negative return on equity of 1.39%. On average, equities analysts forecast that Sunrun Inc. will post -0.72 EPS for the current year. 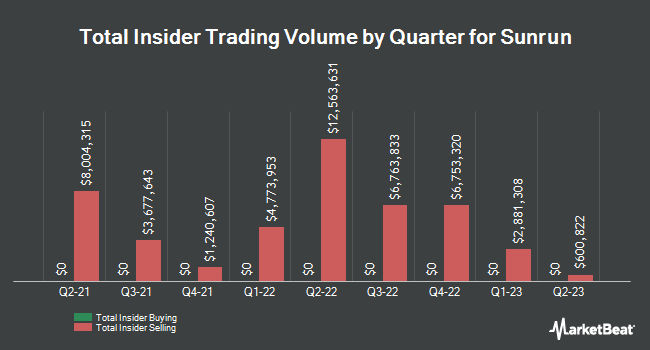