Moody National Bank Trust Division purchased a new stake in shares of Pinnacle West Capital Co. (NYSE:PNW – Get Rating) during the second quarter, according to its most recent Form 13F filing with the Securities and Exchange Commission (SEC). The firm purchased 3,061 shares of the utilities provider’s stock, valued at approximately $224,000.

In related news, Director Kathryn L. Munro sold 2,468 shares of the business’s stock in a transaction that occurred on Friday, September 9th. The stock was sold at an average price of $76.99, for a total value of $190,011.32. Following the completion of the sale, the director now directly owns 16,180 shares in the company, valued at approximately $1,245,698.20. The transaction was disclosed in a filing with the SEC, which can be accessed through the SEC website. Corporate insiders own 0.31% of the company’s stock.

Pinnacle West Capital (NYSE:PNW – Get Rating) last announced its quarterly earnings results on Wednesday, August 3rd. The utilities provider reported $1.45 earnings per share (EPS) for the quarter, beating the consensus estimate of $1.41 by $0.04. The business had revenue of $1.06 billion during the quarter, compared to analyst estimates of $974.60 million. Pinnacle West Capital had a return on equity of 9.04% and a net margin of 13.88%. The firm’s revenue was up 6.1% on a year-over-year basis. During the same period in the previous year, the company earned $1.91 EPS. On average, equities research analysts expect that Pinnacle West Capital Co. will post 3.98 earnings per share for the current fiscal year. 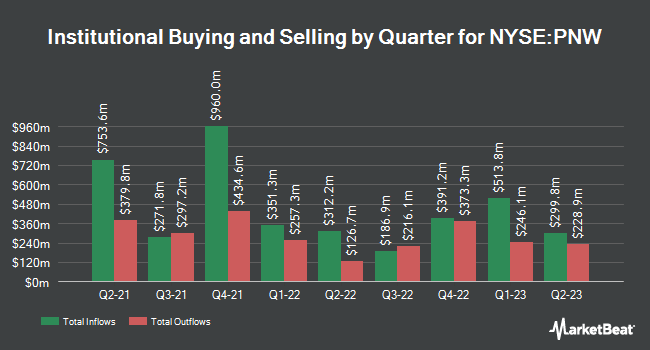