State of Alaska Department of Revenue trimmed its stake in Snap-on Incorporated (NYSE:SNA – Get Rating) by 3.3% during the second quarter, HoldingsChannel.com reports. The fund owned 26,321 shares of the company’s stock after selling 885 shares during the period. State of Alaska Department of Revenue’s holdings in Snap-on were worth $5,185,000 at the end of the most recent reporting period.

Want More Great Investing Ideas?
A number of brokerages have recently weighed in on SNA. MKM Partners began coverage on Snap-on in a report on Thursday, June 9th. They set a “neutral” rating and a $238.00 price target on the stock. UBS Group reduced their price objective on Snap-on to $175.00 in a research report on Friday, July 22nd.

Snap-on (NYSE:SNA – Get Rating) last posted its quarterly earnings data on Thursday, July 21st. The company reported $4.27 earnings per share for the quarter, topping the consensus estimate of $3.91 by $0.36. Snap-on had a return on equity of 20.51% and a net margin of 19.83%. The business had revenue of $1.14 billion during the quarter, compared to analysts’ expectations of $1.10 billion. During the same quarter in the previous year, the firm earned $3.76 EPS. The firm’s revenue was up 5.1% compared to the same quarter last year. On average, equities research analysts predict that Snap-on Incorporated will post 16.14 EPS for the current fiscal year.

The company also recently declared a quarterly dividend, which was paid on Friday, September 9th. Investors of record on Friday, August 19th were paid a dividend of $1.42 per share. The ex-dividend date was Thursday, August 18th. This represents a $5.68 annualized dividend and a yield of 2.61%. Snap-on’s dividend payout ratio is 35.63%.

Want to see what other hedge funds are holding SNA? Visit HoldingsChannel.com to get the latest 13F filings and insider trades for Snap-on Incorporated (NYSE:SNA – Get Rating). 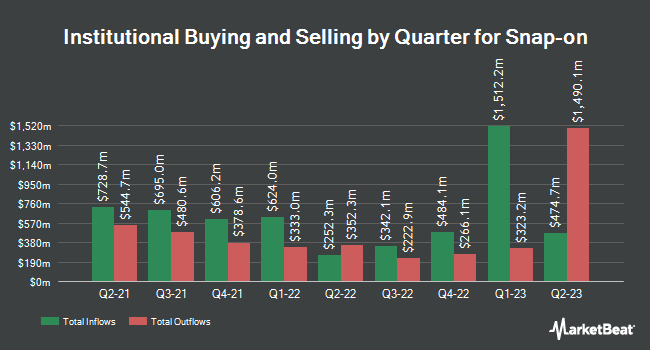 Receive News & Ratings for Snap-on Daily - Enter your email address below to receive a concise daily summary of the latest news and analysts' ratings for Snap-on and related companies with MarketBeat.com's FREE daily email newsletter.

Complete the form below to receive the latest headlines and analysts' recommendations for Snap-on with our free daily email newsletter: