Walleye Capital LLC increased its position in Annexon, Inc. (NASDAQ:ANNX – Get Rating) by 366.9% during the first quarter, Holdings Channel.com reports. The institutional investor owned 245,254 shares of the company’s stock after purchasing an additional 192,727 shares during the period. Walleye Capital LLC’s holdings in Annexon were worth $670,000 at the end of the most recent reporting period.

Want More Great Investing Ideas?
Annexon (NASDAQ:ANNX – Get Rating) last announced its quarterly earnings data on Monday, August 8th. The company reported ($0.96) earnings per share (EPS) for the quarter, missing the consensus estimate of ($0.94) by ($0.02). During the same period in the prior year, the company earned ($0.82) earnings per share. Sell-side analysts predict that Annexon, Inc. will post -3.52 earnings per share for the current year.

In other news, Director Muneer A. Satter acquired 2,453,988 shares of the company’s stock in a transaction that occurred on Thursday, July 7th. The shares were bought at an average price of $3.84 per share, with a total value of $9,423,313.92. Following the completion of the purchase, the director now directly owns 4,408,966 shares in the company, valued at $16,930,429.44. The transaction was disclosed in a legal filing with the Securities & Exchange Commission, which can be accessed through this hyperlink. 8.50% of the stock is owned by insiders.

Annexon, Inc, a clinical-stage biopharmaceutical company, discovers and develops therapeutics for autoimmune, neurodegenerative, and ophthalmic disorders. The company's C1q is an initiating molecule of the classical complement pathway that targets distinct disease processes, such as antibody-mediated autoimmune disease and complement-mediated neurodegeneration.

Want to see what other hedge funds are holding ANNX? Visit HoldingsChannel.com to get the latest 13F filings and insider trades for Annexon, Inc. (NASDAQ:ANNX – Get Rating). 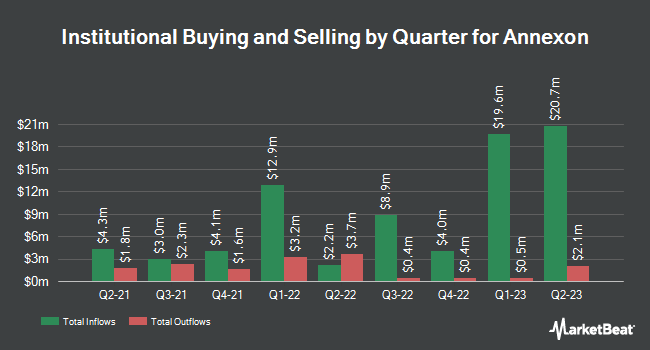 Receive News & Ratings for Annexon Daily - Enter your email address below to receive a concise daily summary of the latest news and analysts' ratings for Annexon and related companies with MarketBeat.com's FREE daily email newsletter.

Complete the form below to receive the latest headlines and analysts' recommendations for Annexon with our free daily email newsletter: