Olin (NYSE:OLN – Get Rating) had its target price reduced by Bank of America from $69.00 to $62.00 in a research report sent to investors on Wednesday, The Fly reports.

Want More Great Investing Ideas?
The business also recently announced a quarterly dividend, which was paid on Friday, September 9th. Stockholders of record on Wednesday, August 10th were issued a dividend of $0.20 per share. This represents a $0.80 annualized dividend and a dividend yield of 1.77%. The ex-dividend date was Tuesday, August 9th. Olin’s dividend payout ratio is 8.41%.

In other news, COO James A. Varilek sold 3,345 shares of the company’s stock in a transaction on Thursday, August 18th. The stock was sold at an average price of $57.81, for a total transaction of $193,374.45. Following the completion of the sale, the chief operating officer now directly owns 17,761 shares of the company’s stock, valued at $1,026,763.41. The sale was disclosed in a document filed with the SEC, which is available at the SEC website. 9.00% of the stock is currently owned by company insiders. 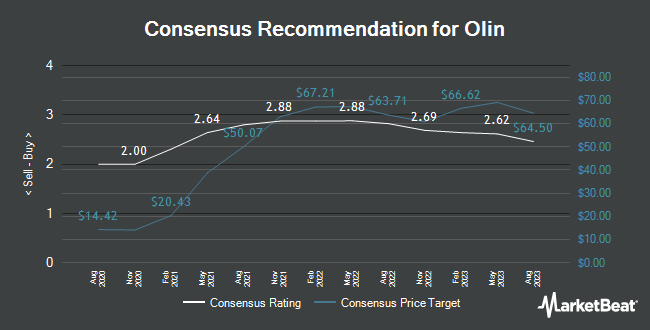