JPMorgan Chase & Co. downgraded shares of Redrow (LON:RDW – Get Rating) to a neutral rating in a report released on Wednesday morning, MarketBeat reports.

Several other research analysts also recently weighed in on RDW. Liberum Capital reissued a buy rating and issued a GBX 725 ($8.76) target price on shares of Redrow in a research report on Wednesday, May 25th. Berenberg Bank downgraded shares of Redrow to a hold rating and dropped their target price for the stock from GBX 1,000 ($12.08) to GBX 510 ($6.16) in a research report on Monday, September 12th. Two equities research analysts have rated the stock with a hold rating and five have assigned a buy rating to the company. According to MarketBeat.com, the stock currently has a consensus rating of Moderate Buy and a consensus price target of GBX 767 ($9.27).

Want More Great Investing Ideas?
The firm also recently declared a dividend, which will be paid on Wednesday, November 16th. Shareholders of record on Thursday, September 22nd will be issued a GBX 22 ($0.27) dividend. This represents a yield of 4.62%. The ex-dividend date of this dividend is Thursday, September 22nd. This is a positive change from Redrow’s previous dividend of $10.00. Redrow’s payout ratio is 40.16%.

Insider Buying and Selling at Redrow 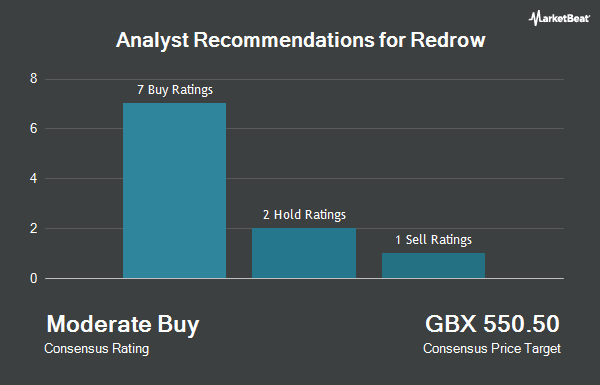 Receive News & Ratings for Redrow Daily - Enter your email address below to receive a concise daily summary of the latest news and analysts' ratings for Redrow and related companies with MarketBeat.com's FREE daily email newsletter.

Complete the form below to receive the latest headlines and analysts' recommendations for Redrow with our free daily email newsletter: