Exane BNP Paribas started coverage on shares of Steven Madden (NASDAQ:SHOO – Get Rating) in a research note issued to investors on Wednesday, The Fly reports. The brokerage issued an outperform rating on the textile maker’s stock.

Want More Great Investing Ideas?
Steven Madden (NASDAQ:SHOO – Get Rating) last issued its quarterly earnings data on Wednesday, July 27th. The textile maker reported $0.63 EPS for the quarter, topping analysts’ consensus estimates of $0.57 by $0.06. Steven Madden had a net margin of 11.61% and a return on equity of 31.40%. The business had revenue of $532.68 million during the quarter, compared to analysts’ expectations of $491.80 million. During the same period last year, the company posted $0.48 EPS. The business’s revenue was up 34.9% on a year-over-year basis. On average, equities research analysts forecast that Steven Madden will post 2.97 earnings per share for the current year.

The company also recently disclosed a quarterly dividend, which will be paid on Monday, September 26th. Stockholders of record on Friday, September 16th will be given a $0.21 dividend. This represents a $0.84 dividend on an annualized basis and a dividend yield of 2.89%. The ex-dividend date of this dividend is Thursday, September 15th. Steven Madden’s payout ratio is currently 26.33%. 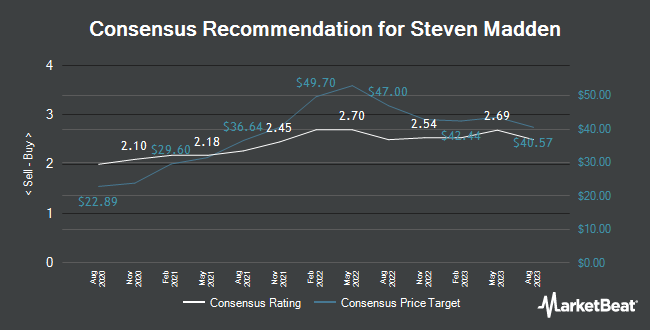