Walleye Capital LLC acquired a new position in shares of Rallybio Co. (NASDAQ:RLYB – Get Rating) in the 1st quarter, according to the company in its most recent disclosure with the Securities and Exchange Commission (SEC). The institutional investor acquired 59,543 shares of the company’s stock, valued at approximately $416,000.

Separately, JMP Securities upped their price objective on Rallybio from $29.00 to $34.00 and gave the company a “market outperform” rating in a research note on Tuesday, August 9th.

Rallybio (NASDAQ:RLYB – Get Rating) last released its quarterly earnings data on Monday, August 8th. The company reported ($0.57) earnings per share (EPS) for the quarter, beating the consensus estimate of ($0.61) by $0.04. Equities analysts anticipate that Rallybio Co. will post -2.16 EPS for the current year.

Rallybio Corporation, a clinical-stage biotechnology company, engages in discovering, developing, manufacturing, and delivering therapies that enhance the lives of patients suffering from severe and rare diseases. Its lead product candidate is RLYB212, a monoclonal anti-HPA-1a antibody that is in Phase I clinical trial for the prevention of fetal and neonatal alloimmune thrombocytopenia (FNAIT).

Want to see what other hedge funds are holding RLYB? Visit HoldingsChannel.com to get the latest 13F filings and insider trades for Rallybio Co. (NASDAQ:RLYB – Get Rating). 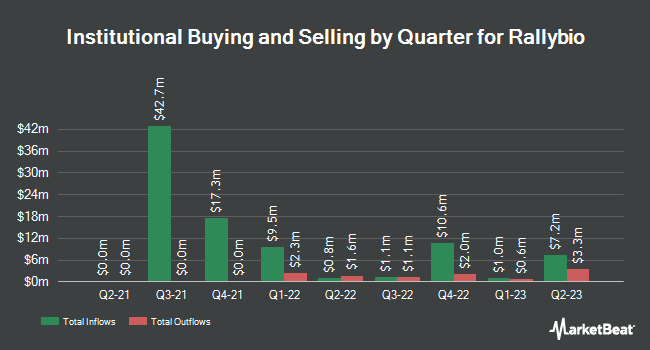 Receive News & Ratings for Rallybio Daily - Enter your email address below to receive a concise daily summary of the latest news and analysts' ratings for Rallybio and related companies with MarketBeat.com's FREE daily email newsletter.

Complete the form below to receive the latest headlines and analysts' recommendations for Rallybio with our free daily email newsletter: