Canadian Pacific Railway (TSE:CP – Get Rating) (NYSE:CP) had its price target lifted by National Bankshares from C$98.00 to C$105.00 in a report published on Thursday, BayStreet.CA reports.

The company also recently announced a quarterly dividend, which will be paid on Monday, October 31st. Stockholders of record on Friday, September 30th will be paid a $0.19 dividend. The ex-dividend date is Thursday, September 29th. This represents a $0.76 annualized dividend and a dividend yield of 0.79%. Canadian Pacific Railway’s dividend payout ratio (DPR) is currently 26.48%.

Canadian Pacific Railway Limited, together with its subsidiaries, owns and operates a transcontinental freight railway in Canada and the United States. The company transports bulk commodities, including grain, coal, potash, fertilizers, and sulphur; and merchandise freight, such as energy, chemicals and plastics, metals, minerals and consumer, automotive, and forest products. 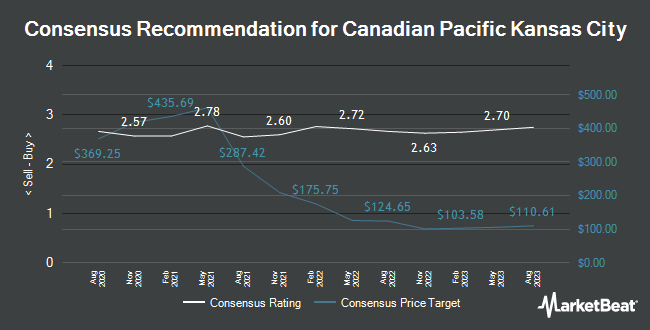 Complete the form below to receive the latest headlines and analysts' recommendations for Canadian Pacific Railway with our free daily email newsletter: